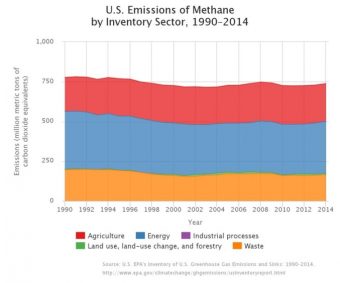 The dramatic resurgence of the United States as an energy superpower over the past decade has provided tremendous benefits for the country, with significant savings in energy costs for everyday Americans, critical national security improvement, and environmental benefits from the application of advanced technologies and the increased use of clean-burning, abundant natural gas.

The U.S. oil and natural gas industry has proven that we can develop the energy that our economy relies upon here at home, while ensuring that those resources are developed safely and responsibly. This includes developing and applying technologies and best practices that effectively reduce emissions of methane, which is the key component of natural gas and thus a vital product for our industry to bring to the U.S. market.

Nationwide, as well as globally, there is an increasing reliance on the usage of natural gas. This has been made possible in the United States as a result of the application of the advanced engineering technologies of hydraulic fracturing and horizontal drilling. Furthermore, due to industry’s leadership in the deployment of mitigation measures and investment in new technologies, petroleum and natural gas companies are reducing their releases of all greenhouse gases (GHGs), and in particular methane. North American investments in GHG mitigating technologies are estimated to have totaled $431.6 billion between 2000 and 2014. U.S.-based petroleum and natural gas companies invested an estimated $217.5 billion in GHG mitigating technologies, significantly more than other U.S. based private industries. The industry clearly is a leader in reducing emissions, without the imposition of additional regulations.

Additionally, it is expected that natural gas will remain important to many sectors of the U.S. economy, including electricity generation, industrial heating, chemical feedstocks, and residential and commercial water and space heating. In its 2016 Annual Energy Outlook (AEO), the EIA projects that U.S. natural gas consumption will rise, an average of about 1 percent annually to 2040. The industrial and electric power sectors make up 49 percent and 34 percent of this expected growth, respectively, while consumption growth in the residential, commercial, and transportation sectors is projected to be much lower.

The EPA’s U.S. greenhouse gas inventory is comprised of emission estimates for seven GHG compounds or groups of compounds. When examining emissions from 1990-2014, methane emissions from natural gas systems – associated with the operation of natural gas systems for exploration, production, processing, transmission and distribution – declined from a high of 206.6 million metric tons of carbon dioxide equivalent (MMT CO2e) in 1990 to the current estimate of 176.1 MMT CO2e for 2014, a decline of 14.8 percent. Over the same period of time, U.S. natural gas production increased by 47 percent. In other words, U.S emissions of methane from the natural gas sector decreased noticeably during one of the largest increases in natural gas production in the nation’s history.

Industry innovation and a continuous commitment to emission reductions have contributed to methane emission reductions from oil and natural gas sources. Some of the emission reduction technologies implemented by industry include installation of vapor recovery units, development of techniques for reduced emissions during well completions, increased use of lower-emitting pneumatic controllers and pumps, among other things.

Despite the success of the industry in reducing methane emissions, the industry is under threat of various regulations that will impose significant costs without commensurate benefits. The Environmental Protection Agency recently finalized a suite of new regulations targeting our industry. Each of the EPA rules will likely significantly impact on our industry’s operations and, collectively, they have the potential to hinder our ability to continue providing the energy our nation demands. These cumulative impacts must be considered in conjunction with the impacts of the lowered ozone standards and the pending Bureau of Land Management (BLM) methane rule, which will likely require costly methane controls for some of the very same emission sources being regulated by EPA. All of this comes on top of state regulation of our industry as well.

More specifically, API has raised numerous concerns with EPA’s New Source Performance Standards (NSPS) for the oil and natural gas sector. Many of API’s concerns stem from the broad applicability of the final rule and the one-size-fits-all approach to regulating an industry that varies greatly in the type, size and complexity of operations. EPA has justified the regulation using economic studies on “average model facilities” without determining whether the resulting control requirements are appropriate for the entire range of sources included in the source category. The rule applies NSPS in unique and unprecedented ways to categories and equipment not previously listed, while relying on unsound legal justification. The notification, monitoring, recordkeeping, performance testing and reporting requirements are significantly more burdensome than justified for the small and/or temporarily affected facilities.

EPA’s cost benefit analysis for the rule is unsound. EPA estimates a net $150 million annual benefit from the rule. In order to achieve this net benefit, EPA applied a social cost of methane (SC-CH4) estimate on the benefit side that is highly speculative, not sufficiently peer-reviewed, and ultimately not suitable for policy applications. Independent review by NERA found that the benefits provided by the rule, after compensating for flaws in EPA’s calculation, could be as much as 94 percent lower. When combined with the revised cost estimates and reduced emission benefits found in API’s analysis, the rule could result in net costs of more than $1 billion in 2025.

EPA is also now collecting data through an Information Collection Request (ICR) to determine whether or how to regulate existing sources in the oil and natural gas sector. Rather than directly moving to the regulation of existing sources, API supports the ICR as an appropriate step to better understand existing sources.

API urges EPA to simplify and streamline the information gathering in the ICR, so that the effort reduces the burden to industry while adequately identifying the appropriate data required for understanding existing sources of methane emissions in our industry.

In addition, the proposed scope and timelines of the draft ICR are aggressive and unrealistic for the amount of information the EPA is seeking. As drafted, EPA has significantly underestimated the burden associated with responding to the ICR and has not provided realistic response deadlines for operators. API suggests a streamlined scope that provides EPA with relevant data and provides realistic reporting timeframes.

Methane emission reduction trends by the industry are now observable despite major increases in the production and use of natural gas. Improved policy measures, removal of bureaucratic barriers, and regulatory certainty are imperative to allow these trends to accelerate and lead to even greater GHG emission reductions, as well as the benefits of reduced air pollutants such as SO2, NO2 and PM. Innovation and technological advancement through the free-market, rather than command and control regulations, have proven to be the solution to environmental questions and should be embraced by regulators and policy makers moving forward.