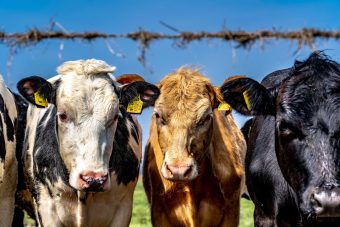 Exhaust emissions from gasoline and diesel cars get a lot of attention from policymakers attempting to combat climate change. But another very large source of carbon emissions has nothing to do with transportation. Emissions of methane have increased dramatically over the past few years, with livestock raised for human food as the largest source by far.

Methane emissions from food production have gotten so high, in fact, that they are approaching a “worst-case scenario” for climate change, according to a pair of studies co-authored by Rob Jackson, chair of the Earth System Science Department at Stanford University. Jackson is also head of the Global Carbon Project; that effort focuses primarily on measuring emissions of carbon, but it also organized these studies. Like carbon dioxide (CO2), methane is a greenhouse gas.

More attention is often paid to CO2 emissions, despite the fact that methane’s potential for global warming is greater and its lifespan in the atmosphere much shorter. “Carbon dioxide has a longer reach,” Jackson said in a Stanford press release on the studies, “but methane strikes faster.” Humans are responsible for 60 percent of methane emissions, and most of that total comes from agriculture and livestock farming, according to the research.

The major sources include livestock, which emit methane through bodily functions, and rice fields, which emit the gas when flooded. Emissions from food production may actually pose a greater threat to the Earth’s climate in the future than emissions generated by burning fossil fuels, Jackson said. If left unchecked, Jackson and his colleagues estimate these emissions could cause global temperatures to rise as much as 6 degrees Fahrenheit. That’s equivalent to about 4 degrees Celsius, or twice the amount scientists generally consider to be the limit for preventing irrevocable environmental damage. To avert this, scientists advocate changes to food-production processes.

That includes developing rice that requires less flooding of its fields, changing livestock feeding regimens to alter intestinal processes, and even promoting less meat-intensive diets. Other sources of methane, such as leaks and flares from natural-gas drilling and coal mines will have to be addressed too, as will emissions from landfills. Before widespread mitigation efforts can begin, though, scientists will have to gain a better understanding of methane emissions. Currently, emissions are not rigorously tracked like those of CO2, making effective planning of mitigation efforts difficult.

The Global Carbon Project recently announced that global CO2 emissions have been flat for the last three years. As CO2 emissions level off and potentially decrease, methane will begin to account for a larger share of overall greenhouse-gas emissions, and will thus become more important.