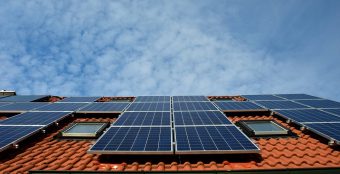 Marks & Spencer is using crowdfunding to back the installation of solar panels on its stores.

The retailer is partnering with Energy4All, a not-for-profit group that helps community groups set up energy co-ops, with the aim of raising £1.23m to put panels on nine large stores including Torbay in Devon, Truro in Cornwall and Cheshunt in Hertfordshire.

A new entity, M&S Energy Society, is inviting investments of between £100 and £100,000 to install and own 891kWh-worth of panels for 20 years from which the retailer will buy energy. The group is offering a target interest rate of 5% each year for those who invest.

Lydia Hopton, Plan A project manager at M&S, said: “This project is a great opportunity for customers to invest in green energy and help the environment, while also supporting local community groups. We’re really excited that M&S will be the first retailer to launch a scheme of this kind.”

Profits from M&S Energy Society will be distributed through a community benefit fund to help support local energy-related projects, such as improving insulation on community buildings or helping local residents cut fuel consumption. Members of the scheme will be able to vote on the charities and initiatives which benefit.

The scheme is the first corporate tie-up for Energy4All, which has backed 20 renewable energy co-ops around the UK, most of which are based around wind power.

A spokeswoman for the group said it hoped its tie-up with M&S would be the first of many corporate joint ventures, but a 65% cut in government incentives in January had now made this unlikely.

She said the group had been able to pre-register the M&S stores in January so that they would benefit from the previous more generous tariff but that would not be possible in future.

“We did want this to be the blueprint for more but the changes in tariff have put a dampener on that,” said the spokeswoman.

The Energy Society scheme is part of M&S’s plan to source 50% of electricity used in its UK buildings from small-scale renewables by 2020. M&S installed the UK’s largest single array of rooftop solar panels on its distribution centre in Castle Donington in 2014.

A number of other retailers have also invested heavily in renewable energy. Sainsbury’s is one of the largest rooftop solar operators in Europe. The supermarket installed more than 170,000 panels above stores and distribution centres as part of a plan to go off-grid eventually.

Kingfisher, the owner of B&Q and Screwfix, is putting solar panels on its distribution centres and some stores as part of a £50m investment to cut its reliance on the National Grid.

Last year, Ikea, the world’s biggest furniture retailer, pledged to spend €1bn (£700m) on renewables as part of its plan to generate all the energy required by its shops and factories from clean sources by 2020.