The ocean off the western coast of North America is five degrees Fahrenheit hotter than usual after warming at an unusually rapid rate, according to the US National Oceanic and Atmospheric Administration (Noaa). 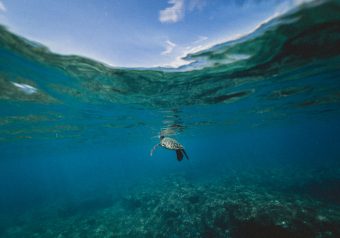 It has been dubbed the “north-east Pacific marine heatwave of 2019”.

Marine heatwaves are defined as oceanic events in which the surface temperature of the water is warmer than 90% of past measurements for at least five days in a row. The current heatwave is the second-largest since scientists started tracking the phenomenon in 1981, Noaa reported on Friday.

If the abnormal patch does not dissipate soon, it could become as destructive as the so-called “blob” of warm water in the same area that, in 2014-2016, created toxic algae blooms, killed sea lions and endangered whales by forcing them to forage closer to shore.

Oceanographers started to notice something strange back in June in a triangle-shaped mass of ocean stretching from Alaska to Hawaii to southern California. The direct cause of the heat is weak winds, though these conditions do not usually persist for months at a time as they have done this year. Warm water has also lingered from the previous extreme heat event.

“It went from a little bit warmer than average to about as warm as we’ve ever seen it, in just three months,” said Nate Mantua, a research scientist at Noaa’s Southwest Fisheries Science Center in Santa Cruz, California.

“It’s not clear to me that there’s a simple link between persistence of this weather pattern and longer-term climate change,” Mantua added. “There might be. It’s still an evolving field and there are a lot of open questions.”

The oceans have absorbed about 90% of excess heat linked to the climate crisis. “That’s played out over many decades now, and it’s a slow process compared with this event, which has happened in just three months,” Mantua said.

It is also not known if there have been major impacts on marine life, mostly because researchers have relatively little monitoring equipment in the 4m square miles of ocean affected. Oceanographers are starting to see subtle effects in the distribution of some species, Mantua said, such as tuna that are hanging out closer to the coast to avoid the warmer waters.

The impact has mostly been limited to the upper 50 meters of the ocean. “If it persists for one to two years, then warming will penetrate to deeper depths,” Mantua said.