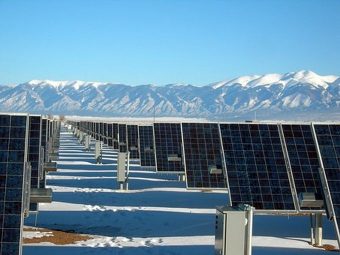 North Dakota averages 60 percent of possible sunshine each day, according to the North Dakota State Climate Office. But according to Database of State Incentives for Renewables and Energy Efficiency, the state does not have many goals or incentives for utilities or individuals to invest in solar energy.

According to the North Dakota Century Code, in 2007 the Legislature established an objective of 10 percent of all retail electricity sold in the state be obtained by renewable and recycled energy by 2015. The objective was voluntary, and there were no penalties for providers that failed to meet it.

Jerry Lein, North Dakota Public Service Commission utility analyst, said the state exceeded its goal and reached 16 percent renewable energy by 2015. Lein said he was not involved in setting the 2015 goal, but he believes the goal was made voluntary because of a lack of legislative support for a mandatory standard.

Lein said he does not know if the Legislature will implement any new goals, but he expects the development and use of renewable energy will continue to grow.

South Dakota has the same voluntary objective as North Dakota, while Montana and Minnesota have required renewable energy standards, according to the National Conference of State Legislatures. The organization said 29 states have mandatory Renewable Portfolio Standards, eight have voluntary goals and 13 have no renewable energy standards or target.

According to the Database of State Incentives for Renewables and Energy Efficiency, North Dakota doesn’t offer solar rebate programs or tax credits for solar system purchasers. However, the database states a taxpayer may claim a federal tax credit of 30 percent of qualified costs for a home solar electric system.

The state only offers a sales tax exemption on solar energy systems on a commercial or industrial scale of systems above 100 kilowatts, according to the database.

North Dakota requires investor-owned utilities to offer net metering to all customers, but electric cooperatives and municipal utilities are exempt, the incentives database says. Net metering requires a utility to monitor how much energy the solar power system produces and how much the user consumes and gives credit for the surplus.

Electricity companies in the state vary in renewable energy offerings and programs available to consumers.

According to Otter Tail Power Co., 20 percent of its energy supply comes from renewable resources. The company also offers the “TailWinds” program, which allows customers to buy wind-generated energy, but no solar energy programs are offered.

Xcel Energy owns a utility-scale solar system and purchases power from similar systems, according to its website. The company also offers a Solar Rewards program that assists customers installing their own solar panels and a community program that allows customers to invest in solar without purchasing their own system. However, the rewards programs are not available in North Dakota.

Northern Plains Electric Cooperative system engineer Ashten Dewald said the solar project has gotten a lot of interest from the public and other co-ops. Dewald said the advice she gives people interested in installing a solar system is to look at the costs and benefits.

“If you want to be eco-friendly and install solar panels for that reason, great, but at this point, it’s not really justifiable with the low cost of North Dakota energy,” Dewald said.

According to the Institute for Energy Research, North Dakota has the seventh-lowest electricity price in the country at 6.81 cents per kilowatt.

However, the price of solar is getting cheaper every day, and installation and system costs are dropping, Dewald said.

“We don’t have anything new planned right now, but with solar being on the rise, I’m not going to rule anything out,” Dewald said.

Cass County Electric Cooperative is also investing in solar. The co-op started a community solar program in September, according to its website.

Prairie Sun Community Solar is a 102-kilowatt solar system made of 324 solar panels on city land in Fargo. Cass County Electric Cooperative members can participate in the program by purchasing full or half panels and will receive solar credits on their monthly bills.

Troy Knutson, manager of technical services for Cass County Electric Cooperative, said the co-op has received a lot of interest about the project and two-thirds of the panels have been reserved.

Knutson said the co-op is hoping to get 100 percent of the panels reserved. He said the co-op was also expecting more interest from commercial members.

The co-op has 40 members who have their own solar systems, but they also have many customers living in apartments, Knutson said. The community project gives them an opportunity to participate in solar, when they otherwise wouldn’t have been able to, Knutson said.

Knutson said the low cost of energy in North Dakota is why solar systems haven’t taken off. The systems have a long payback time, and people want to see results sooner, Knutson said.

The co-op has enough land leased to build a similar-sized project, but nothing is in the works yet, Knutson said.

“We have to wait and see what the level of demand is going to be,” Knutson said. “There almost needs to be an incentive to inspire more development.”