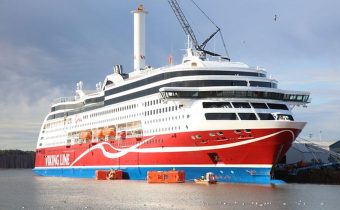 As global governments clash over the level of ambition the shipping industry should incorporate in its international climate plan this week, the green economy continues to push forward a host of innovations which promise to cut the carbon impact of seafaring vessels.

In Finland, the M/S Viking Grace will this week become the only passenger ship in the world equipped with a ‘rotor sail’ that harnesses wind power for propulsion when it sets sail from Turku on the first of its wind-assisted voyages to the Swedish capital Stockholm tomorrow.

The fully automated solution senses whenever the wind is strong enough to assist in propelling the ship, Norsepower explained, helping to cut fuel consumption and reduce carbon emissions by up to an estimated 900 tonnes a year.

The rotor sail system will help boost the green credentials of the Viking Grace, which has been in operation since 2013.

Fuelled by liquefied natural gas (LNG), the ship is already one of the most environmentally friendly passenger ships in the world, according to the firm, offering lower emissions and noise levels than many similar vessels.

Jan Hanses, Viking Line CEO, said news of the first voyage of the wind-assisted ferry to Stockholm was “a great day for us”.

“As an Åland shipping company, we rely on the sea for our livelihood so it’s of prime importance for us to promote the well-being of the marine environment,” he said. “We want to pioneer the use of solutions that reduce the environmental load.”

In addition, Viking Line now also plans to install two Norsepower rotor sail on board a new ferry vessel which is currently being built in China and is due to come into operation in 2020.

Norsepower CEO Tuomas Riski said innovations like the rotor sail concept had gained interest in the shipping community due to the growth in environmental regulations. “The completion of this project is a great moment for all those involved,” he said.

Meanwhile, on the other side of the world on the island of Bora Bora, holidaymakers can now take a tour of the lagoon on an electric, solar powered, noise-free catamaran developed by Soel Yachts in cooperation with Okeanos Foundation for the Sea and the Bora Peal Beach Resort.

The first of many SoelCat 12’s that the company hopes to produce, the vessel utilises a 120kWh battery which, when the boat is not in operation, can collect solar energy that can then provide power for up to four households using a 15kVA inverter that plugs into the Bora Bora resort when the vessel is moored.

According to SoelYachts, the French Polynesian resort is thus able to use the solar electric boat to power it desalination plant, producing up to 4,000 litres of fresh water every hour. It added that the vessel was also designed to be “demountable, like an IKEA furniture piece” enabling it to be affordably shipped to destinations around the world.

“Whether the SoelCat 12 is used in Bora Bora, Sydney, the Maldives or Bahamas, the benefits and PR values are applicable on a worldwide scale,” he said.

The latest developments are just two examples of emissions-saving innovations being deployed by the shipping industry, which also includes a raft of new hull designs, biofuel and fuel cell developments, and ‘slow steaming’ strategies designed to curb emissions across the sector.

Campaigners and some shipping firms have argued these emerging technologies and others could deliver steep emissions cuts across the sector and are calling for the IMO to this week adopt ambitious new decarbonisation targets. But some shipping firms and investors have countered that upgrades will prove costly for operators and as such this week’s talks remain on a knife edge as they enter the final straight.