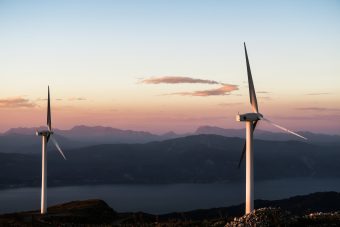 Low-carbon energy was used to generate more than half of the electricity used in the UK for the first time last year, according to official data.

A rapid rise in renewable energy, combined with low-carbon electricity from nuclear reactors, made up almost 53% of generation in 2018, the government’s annual review of energy statistics revealed.

Renewable energy sources set a new record by meeting a third of the UK’s power generation last year after the UK’s capacity to generate power from the sun, wind, water and waste grew by 10%.

The UK’s use of coal fell by a quarter to a record low of just 5%, according to the report.

National Grid said earlier this year that the UK had recorded its greenest ever winter due to windy weather and dwindling coal-fired power.

The rise of renewables has edged out coal and gas plants which together made up less than 45% of the UK’s electricity last year.

Gas generation fell to 39.5% of the generation mix last year, from 40.4% in 2017. Coal generation continued to decline, falling to 5.1% last year after the Eggborough coal plant shut and Drax converted one of its units to burn biomass instead.

Only five coal plants will be left running by the end of the coming winter after SSE announced plans to shut its last coal plant at Fiddler’s Ferry near Warrington, Cheshire, in March 2020.

Emma Pinchbeck, the deputy chief executive of Renewable UK, said the record-breaking figures “clearly show that investment in renewables and the government’s championing of offshore wind is delivering rapid change to our energy system”.

“As well as helping keep prices down for consumers and boosting the competitiveness of our businesses, renewables are a huge economic opportunity, bringing employment and investment to all parts of the UK,” she said.

The government threw its weight behind the offshore wind sector earlier this year by promising developers the chance to compete for a share of £557m of state subsidies in exchange for industry investment of £250m over the next 11 years.

The deal could help offshore wind grow to 30% of the UK’s electricity by 2030 as the UK works towards a 2050 target to cut emissions from the economy to net zero.

But ministers have refused to lift a block on support for new onshore wind farms, which are unable to compete for subsidies despite being one of the cheapest forms of electricity.

“To achieve its net zero ambitions, the new government needs to go further and faster – and the first steps should be removing the barriers to onshore wind which is our cheapest source of power, and building on our successes in innovative technologies like tidal energy and floating wind where the UK can be a world leader,” Pinchbeck said.