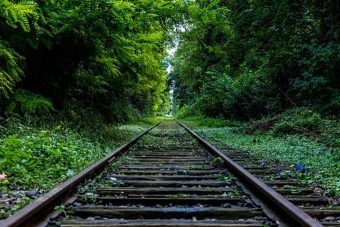 A multi-billion pound rail upgrade project might not be the most obvious place to look for biodiversity benefits, but according to Network Rail the high profile overhaul of London Bridge has led to a massive boost in biodiversity levels in the surrounding area.

The company announced yesterday that the Bermondsey Dive Under part of the huge upgrade project has led to a 113 per cent in biodiversity in the local area, thanks to the deployment of new wildflower embankments and green walls.

The Dive Under is part of a joint project by Network Rail, Skanska, and Ramboll designed to streamline the tracks running in to London Bridge, reducing delays and increasing the number of trains that can use the station at peak times.

Two new lines using the junction will come into use this summer and commuters will be able to see how a range of design innovations have helped to revitalise biodiversity in the area.

Prior to the start of the project in 2012, the Bermondsey site had “limited botanical diversity and low conservation value”, according to Network Rail, with the area blighted by Japanese Knotweed and debris from previous tenants that had led to soils that were “heavily contaminated” with asbestos and hydrocarbons.

The project removed over 21,900 tonnes of contaminated material and eradicated the Japanese Knotweed. It then undertook a programme of wildflower planting and installed 765 square metres of green walls under arches and access ramps.

The company said the planting had created “green corridors and stepping stones to the wider area, leaving a fantastic legacy both environmentally and aesthetically for the local community”. It added that the programme had led to a doubling of biodiversity in the area.

The update was provided yesterday as the company confirmed it had been awarded an ‘Excellent’ rating under the CEEQUAL international infrastructure sustainability assessment, after securing a score of over 96 per cent for the project.

“The fantastic score of 96.6 per cent is the result of our collaborative way of working to not only protect but enhance the environment and the community whilst delivering this complex project,” said Gerardo Austria, consents and sustainability manager at Network Rail.

Charl de Kock, project manager, Skanska, said the score was a result of the early work the companies did to ensure sustainability was a top priority for the project.

“We were able to achieve this excellent CEEQUAL score due to us embedding a sustainable approach from the design stage through to the delivery of the project,” he said. “This success is testament to the commitment to sustainability from our client, Network Rail, our design partner, Ramboll, and all our other contracting partners and supply chain.”