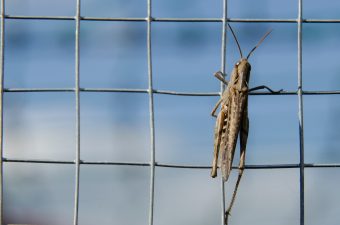 Why are we seeing a resurgence of Desert Locust in the Horn of Africa and the Arabian Peninsula?

Well, as we predicted, climatic conditions are driving this new round of locust activity. In many areas, rains came early, triggering earlier than usual reproduction; other areas continue to get steady rains, which sparks locust breeding. Large swathes of Yemen that are inaccessible are also key locust breeding grounds – basically a reservoir for the pest.

We always knew that seasonal change in winds plus these rains would spark another uptick in activity. And that this activity would be significant, given the high numbers of locusts that have been present in the region since January. So though large scale control operations have significantly improved the situation, locust populations remain in the region – especially in remote, hard to reach areas where surveillance or control operations are not possible.

Early and ongoing rains have led to a new cycle of breeding and fresh swarms are forming in Ethiopia, Somalia and Yemen. Immature hopper bands have also been identified in Eritrea, The Sudan and Saudi Arabia and are likely to form new swarms. The winds over the northern portion of the Horn of Africa are now starting to blow southwards again raising concerns they could again reach Kenya later in the year.

Does this mean that efforts to control the upsurge have failed?

Quite the opposite. A massive humanitarian disaster has been averted. With international support coordinated by FAO, over 1.1 million hectares of land in 10 countries have been surveyed and treated for locust infestation since January. When you add in locust control efforts outside of East Africa and Yemen, 2.3 million hectares of land have been controlled this year.

These operations have prevented the loss of 2.3 million tonnes of cereal – enough to feed more than 15 million people a year – in countries already hard hit by acute food insecurity and poverty. And our efforts have blunted impacts to an estimated 1.1 million pastoralist families, as well.

It’s important to remember, by the way, that efforts to contain the last large Desert Locust upsurge, in Africa’s Sahel region, lasted two whole years, from 2003 to 2005. The scale of the challenge and the time required to contain it should not be underestimated.

The Sahel was once again under threat of locust invasion earlier this year. How are things there now? And in Southwest Asia?

There’s been great progress in both those regions. Southwest Asia was indeed facing a huge locust upsurge earlier in the year but thanks to intensive locust control operations by India, the Islamic Republic of Iran and Pakistan, the upsurge has effectively been extinguished there. Kenya experienced its worst outbreak in 70 years, but has now largely contained the locusts to just one northern county. The threat to the Sahel and West Africa has been averted, which is great news for a region wrestling with other threats to food security.

But even in those areas of East Africa where the threat persists, countries are today in a far stronger position to manage and contain the infestations than they were just 10 months ago. National capacities have been significantly strengthened. All the pesticides that are needed to carry out controls has been sourced and deployed across the region. Countries now have fleets of aircraft and ground vehicles for surveillance and control in place and operating. FAO is now helping them scale up fleets again ahead of the winter rainy season.

For us this strengthening of capacity is a major accomplishment. as the goal has not just been to scale up control operations, FAO has prioritized building the capacity of governments to manage locusts. Countries now have in place capacity that just did not exist before, or that was insufficient to meet the threat of this uncommonly large upsurge.

What needs to happen now to contain this renewed locust activity?

When it comes to this pest, perseverance and consistency are key. This is a pest that is endemic in the region and then can explode when the right variables come together. Desert Locusts reproduce like wildfire in good conditions, their numbers growing by a factor of 20 with each 3 month reproductive cycle. Suppression and containment are the goals. We want to see the swarms diminish and the locust return to their solitary, non-threatening life cycle phase..

The planning and action that governments are taking with FAO support remains solid: Survey, target, control consistently – and at scale. There will be no overnight victories. The locust campaign must be sustained over the long haul and this will take time.

Apart from aerial control operations, governments must maintain and increase their control efforts using ground survey and control teams, and reporting with eLocust3, an innovative tool that enables data to be recorded and transmitted in real time via satellite to FAO and national locust centres.