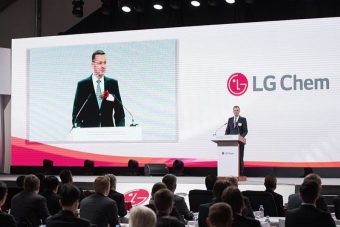 LG is trying to position itself as an important new auto supplier for the transition to electric vehicles. The Chevy Bolt EV helped them recently since they manufacture several of the most important systems for the electric car, especially the battery pack through its LG Chem division.

Now the company announced that it will support the production of 100,000 electric cars per year with new battery factory in Poland.

When they announced the project for the new factory near Wroclaw, Poland in 2015, they were planning for 50,000 electric car battery packs per year.

Today, LG Chem said in a joint statement with the Polish development ministry (via Reuters) that it actually doubled the capacity of the plant to 100,000 battery packs – ~6 GWh of annual capacity.

That’s an over 50% increase in LG Chem’s battery capacity for electric vehicles for a total annual capacity of 280,000 EVs with its other factories: Ochang plant in South Korea, Holland plant in the United States, and Nanjing plant in China.

The new Wroclaw factory is due to be completed next year. LG says that the battery packs will go to “major automakers” without disclosing names.

While there are several other large battery factory projects in Europe, it should be the biggest one by the time it is completed next year. It will employ 2,500 people.

Among those projects, Northvolt is also planning a major battery factory in Europe, Tesla is also planning several more factories, including at least one in Europe, and Daimler recently unveiled its own new battery Gigafactory for electric vehicles in Germany.