Approximately 94% of the 111 species and subspecies of lemur are under threat of extinction in their native country of Madagascar – the only place they exist outside of captivity. Of the remaining lemur groups, only six do not face high risk of extinction, according to the International Union for the Conservation of Nature’s (IUCN) Red List of Threatened Species. This retrogression was revealed by the Primate Specialist Group, a conservation organization that has been analyzing current threats to the survival of lemur populations and their habitats.

Chair of the Primate Specialist Group and Chief Conservation Officer of Global Wildlife Conservation Russ Mittermeier indicated that the “very high extinction risk to Madagascar’s unique lemurs” would compound, generating “grave threats to Madagascar’s biodiversity as a whole.” Loss of habitat poses the single greatest threat the lemurs now face in the wild. Developments in illegal logging and slash-and-burn agriculture, as well as mining activities and charcoal production, are ultimately determining the fate of these endangered animals.

Lemurs also face threats from pet trading hobbyists or hunters who wish to turn them into food. Once a delicacy, lemur’s presence on menus has become more and more mainstream in Madagascar, according to Professor Christoph Schweitzer of the Bristol Zoological Society. In an interview with BBC News, Schwitzer commented, “More and more, we are seeing unsustainable levels of lemur poaching. We see commercial hunting as well – probably for local restaurants. And this is a new phenomenon for Madagascar – we didn’t see it at this scale 15 years ago”

Although many would bow their heads at the unfortunate fate of the lemurs, Schwitzer is an optimist. People “need to shout about these problems and get the message out there” he remarked. “When we published the lemur action plan and the media picked up on it, suddenly we had people call offering to help – to donate money or other resources. That can really make a difference,” he remarked. The “lemur action plan” has already had an effect, protecting habitats that contain the densest numbers of lemur species while helping Madagascar boost its ecotourism in the hopes of tackling poverty. By helping the local people economically, the groups involved in the plan are deterring hunting and other activities destructive to the tropical forests that provide the lemurs with their natural habitat. 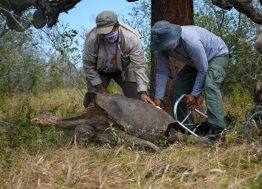 Diego, Key to Saving His Species, Returns Home After More...