Koala populations on the Australian east coast have diminished to the extent the species should now be considered “endangered”, environment groups have said, amid concern that existing protection measures have failed to halt the creeping loss of critical habitat. 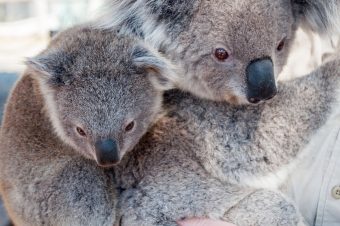 In south-east Queensland, once a stronghold for koala populations, habitat continues to be bulldozed through ineffective offset strategies, loopholes in development restrictions and poor planning for population growth, the groups said.

Last month, the Queensland government released a discussion paper about the state’s environmental offset strategy. It found that in 97% of cases, developers chose to pay a “financial settlement” to clear land rather than provide new habitat for koalas and other species.

The state recently flagged it would use a planning loophole to clear another five hectares of bushland on Brisbane’s south side, by designating the expansion of a shooting complex “essential infrastructure”. The plan is opposed by the Brisbane city council and local conservation groups.

“They seem to regard clay pigeons as essential, but not koalas,” said Michael Petter, the president of the Bulimba Creek catchment coordinating committee.

“The loss of koala habitat doesn’t happen 10,000 hectares at a time, it’s small clearing. The tyranny of small decisions.”

The shooting complex backs onto the northern end of the Koala Coast, a bushland corridor south of Brisbane, home to a nationally significant population of koalas that has undergone a steep decline in numbers in recent decades, mainly due to development pressures.

WWF-Australia, which is calling for the endangered listing for koalas in Queensland and NSW, says it is the slow creep of small developments – which bulldoze a hectare or two at a time – rather than broadscale clearing that has put once-thriving populations and habitat under threat.

Martin Taylor, the protected areas and science conservation manager for WWF-Australia, told Guardian Australia that development pressure on koala habitats was unnecessary and could be avoided, even as Brisbane’s population grew.

Taylor said preliminary research showed there were “conservatively” 200,000 lots in south-east Queensland on land that had already been cleared and that had the potential to be developed for housing.

“Clearing continues to happen, a little bit here, a little bit there, but it doesn’t have to,” Taylor said. “That’s what irritates us. It’s quite possible to meet housing demand on already-cleared land. So why isn’t that the first option? Instead we’re still knocking down virgin forest.”

From 1990 to 2016, at least 9.6m hectares of koala habitat was bulldozed in Queensland and New South Wales.

WWF-Australia and other conservation groups this month released a new strategy, led by the ecologist David Paull, designed to save koalas from extinction. One of its key recommendations was to upgrade the species’ listing from “vulnerable” to “endangered”.

“Weak state, federal and local government laws which allow excessive tree clearing are the main driver of the loss and fragmentation of koala habitat,” Paull said.

The Queensland government says there is “little evidence of any koala population” in the section of bushland it plans to bulldoze to expand the shooting complex, but has extended a public consultation period after concerns were raised.

Bulimba Creek’s Petter said data from the Moggill koala hospital showed there had been 100 koala sightings nearby over 20 years, and that the government seemed to misunderstand the transient nature of koala movement and the need to protect interconnected habitat.

“All the users of the gun club regularly report seeing koalas,” Petter said. “The only people who can’t find them are the consultants who did the biodiversity survey.

“There is little point to having designated … koala habitat if [the government] can just nibble away at it wherever they want by using ‘essential infrastructure’ designations. That’s what you’d expect from a real estate development company, this is state owned land.”