Japan is struggling to find a resting place for soil contaminated in the 2011 Fukushima Daiichi nuclear meltdown. 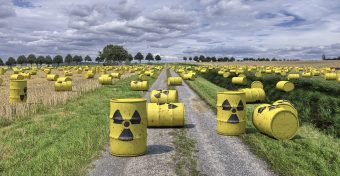 In the years after the disaster, thousands of workers starting removing soil, debris and other contaminated material from the area in a ¥2.9 trillion (£21bn) effort to reduce radiation levels and attract evacuated people back to the region.

This is still ongoing and involves gathering the radioactive soil before it is sieved, flattened in sacks and stored in a pit at an interim storage facility, straddling the towns of Okuma and Futaba.

So far, 2.3 million cubic metres of soil have been brought to the site – this is about 15% of the total.

Japan’s government has pledged that the soil will moved to a permanent site outside of the prefecture by 2045 but not a single location has yet agreed to accommodate the millions of cubic metres of radioactive soil.

The total figure is expected to amount to around 14 million cubic metres of soil by 2021 and many residents do not want this nuclear waste near them.

The Guardian quoted Jiro Hiratsuka, an Environment Ministry Official, as saying: “We are required by law to find a final storage place outside Fukushima, so it can’t be kept here indefinitely.

“It’s true that we have yet to find an appropriate location but a lot will depend on how much space we need and the level of radioactivity in the soil.”