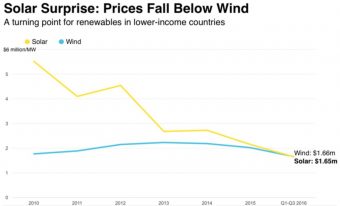 For the first time, solar power is becoming the cheapest form of electricity production in the world, according to new statistics from Bloomberg New Energy Finance (BNEF) released Thursday.

While unsubsidized solar has occasionally done better than coal and gas in individual projects, 2016 marked the first time that the renewable energy source has out-performed fossil fuels on a large scale—and new solar projects are also turning out to be cheaper than new wind power projects, BNEF reports in its new analysis, Climatescope.

The cost of solar in 58 developing nations dropped to about a third of 2010 levels, with China in particular adding a record number of solar projects. And as the Independent notes, solar “has proved a godsend for remote islands such as Ta’u, part of America Samoa, in the South Pacific.”

In fact, Ta’u has been able to abandon the use of fossil fuels altogether and power itself almost entirely on renewable energy.

“Solar investment has gone from nothing—literally nothing—like five years ago to quite a lot,” said Ethan Zindler, head of BNEF’s U.S. policy analysis.

Unsurprisingly, developing countries are at the forefront of this advancement, having invested in clean energy economies to stave off the catastrophic effects of climate change at a greater rate than wealthy nations.

“[F]or populations still relying on expensive kerosene generators, or who have no electricity at all, and for those living in the dangerous smog of thickly populated cities,” Bloomberg reports, “the shift to renewables and increasingly to solar can’t come soon enough.”