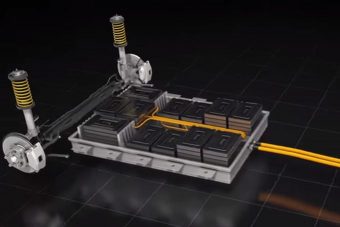 Israeli nanotech firm StoreDot has unveiled a radical ‘ultra-fast-charge’ battery it claims can bring an electric car to full charge in just five minutes – and power it for up to 300 miles.

At the CUBE Tech Fair in Berlin, StoreDot demonstrated a proof of concept of the technology it says is a ‘radical improvement over the traditional lithium ion battery structure.’

The FlashBattery combines organic compounds with nano-materials to slash charging time down to a fraction of that achieved by current methods, and the firm says it will be available in the next three years.

According to a video on the technology, a car running on StoreDot’s modules would be equipped with forty ‘pouches’ – each containing the FlashBattery technology.

These pouches contain nano-dots made from short chains of amino acids, called peptides, arranged in a layered structure.

The peptides are chemically synthesized organic molecules of non-biological origin, according to StoreDot. When combined, these pouches make up a charging module.

‘Within five minutes of charging, the car is fully charged and ready to go – five minutes that just bought you an average of 300 miles.’