A total of 26 national experts from Iraq have been trained to assess and clean-up oil-contaminated sites from the conflict in the country. 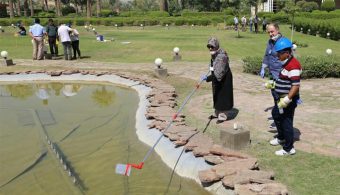 UN Environment conducted a five-day training workshop in Baghdad with officials from the Environment and Oil Ministries on practical aspects of sites, with a focus on sampling strategies and techniques.

It comes as Iraq has seen extensive destruction of infrastructure and looting – from oil resources to archaeological artefacts – by Islamic State in Iraq and the Levant (ISIL).

The officials have given portable oil contamination analysers and sampling tools as well as personnel protective equipment to support the assessment campaign.

They will carry out field surveys of oil contaminated sites in four areas – Nineveh, Salah El-Deen, Kirkuk and Diyala – after which UN Environment will review the findings and provide guidance on site prioritisation process.

The survey will aim to identify priority sites for clean-up that pose a serious risk to human health and the environment.

UN Environment is guiding the mapping campaign through an initial inventory of around 60 oil-contaminated sites, including satellite maps.

Dr Jassim Humadi, Iraq’s Deputy Environment Minister said: “I cannot overstate the need to strengthen the capacity of our environment experts in assessing contaminated site and oil activities and to develop polluting monitoring programmes which represent not only a threat to local communities but whose impacts will also extend for generations to come. During the past few years, Iraq has undergone a transformative leap in its oil production driven by large investments. This poses a major capacity challenge for environment staff to monitor and oversee the industry’s performance, assess the current situation and extrapolate future projections.

“We commend UN Environment’s contaminated site assessment training programme, which is assisting environmental institutions in Iraq to fulfil their responsibility in achieving environmental security in accordance with the objectives of sustainable development to protect the environment and the public health of citizens.”