“We’ll science our way out of global warming.” We hear that all the time from people who don’t quite believe climate change is real and that burning fossil fuels is the cause. Better to wait until the seas close over Miami than to waste time, money, and effort on dealing with the affects of a warming planet now, so the reasoning goes. 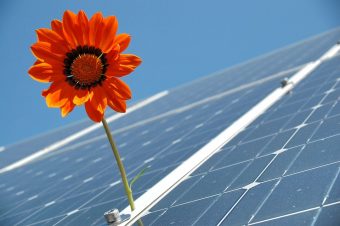 When and if it ever gets to crunch time, scientists — who these people loathe — will suddenly come forward with some miraculous invention that will suck all that nasty carbon dioxide out of the atmosphere and turn it into rocks or bury it in caves beneath the sea. In any event, life will go on pretty much as it always has and we will all be free to watch endless reruns of Keeping Up With The Kardashians without lifting a finger. Sweet!

Actually, says an international team of researchers, the worst renewable energy investments are equal to the best carbon capture strategies. Their report, published in the journal Nature Energy, says resources that would otherwise be spent on developing and installing carbon capture technologies would be better invested in creating more solar panels and wind turbines and focusing on developing energy storage options to support them.

Science Daily reports the researchers came from Lancaster University, Khalifa University, Clemson University, UiT The Arctic University and the University of Florence. They calculated the energy needed for carbon capture technologies across a range of fossil fuel power stations — including coal and natural gas.

They compared those results with the energy required for renewable energy systems such as wind farms and solar panels, then added the energy needed to create battery, hydrogen, or pumped hydro storage. They concluded the worst case for renewables with storage compares favorably to the best case scenario for carbon capture.

Dr Denes Csala, a lecturer in energy storage and system dynamics at Lancaster University and co-author of the research, says “It is more valuable, energetically, to invest the available energy resources directly into building new renewable energy and storage capacity rather than building new fossil-fuel power stations with carbon capture.

“The better net energy return of investing in renewable energy makes it more likely to meet emission targets without risking a reduction in energy availability, due to dwindling fossil fuel supplies and a climate-constrained emissions budget.

“Given its net energy disadvantages, carbon capture and storage should be considered a niche and supplementary contributor to the energy system, rather than be seen as a critical technology option as current climate agreements view it.”

In other words, as a means for keeping the Earth from becoming little more than a burned out cinder, carbon capture is a non-starter. Yet is it promoted vigorously by fossil fuel advocates. Is it realistic or just another dodge designed to protect oil, gas, and coal reserves from becoming stranded assets?

Let’s see. Renewable energy is, umm, renewable! [Shock and awe.] Fossil fuels are not renewable. Those that have been consumed by humanity in the past 160 years took millions of years for nature to produce. Voila! Fossil fuels will run out one day and then the world will have to wait several million years for more.

Clearly, those who rely on fossil fuels care not one whit for future generations, only themselves. Who do you trust, those who seek to preserve the Earth for generations to come or those who would use up every available resource now with no thought for the future? The choice is yours. You decide.