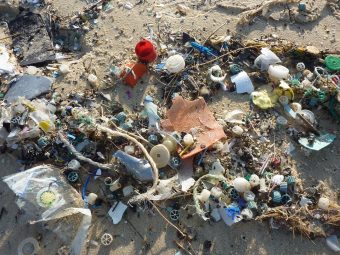 Indonesia unloads more plastic into the oceans than any other country, except China. But now the country plans to invest $1 billion every year to reduce ocean pollution 70 percent by 2025.

Indonesia will spend the entire sum on tackling plastic pollution and other waste dumped in the ocean. According to the World Bank, each of the 250 million residents of Indonesia contributes from 0.8 to one kilogram, or around 1.7 to 2.2 pounds of plastic waste yearly. The country is the second largest plastic polluter in the world, according to a 2015 Science article. Indonesia’s Coordinating Minister for Maritime Affairs Luhut Binsar Pandjaitan announced the $1 billion move to tackle this issue at the 2017 World Oceans Summit held in the country the end of February.

Protecting the country’s oceans is crucial because they’re home to the highest levels of marine biodiversity in the world. Indonesia is part of the Coral Triangle, and its coral reef ecosystems grant food security and attract tourists. Plastic pollution threatens these ecosystems; a recent study said by 2050 there could be more plastic than fish in the ocean.

Pandjaitan said Indonesia could accomplish their goal a few different ways. They could implement a tax on plastic bags, or run a public education campaign. They could also support new industries that draw on biodegradable materials like seaweed or cassava to yield healthier alternatives.

The country made their pledge as part of the United Nations’ Clean Seas initiative; nine countries along with Indonesia have joined the campaign to cut plastic in the ocean through strategies like improved waste management. Anyone can go on the Clean Seas website to commit to actions like avoiding cosmetics with microbeads, avoiding plastic bags, or carrying a reusable coffee cup.