Indonesia wastes upward of 10 billion plastic bags every year, making it the second highest polluter of plastic in the entire world. To address the growing plastic pollution problem, thousands of volunteers gathered around the country last month and participated in one of the largest plastic cleanups to date. The goal of the event was to educate citizens about the dangers of pollution and promote better recycling practices among young people. 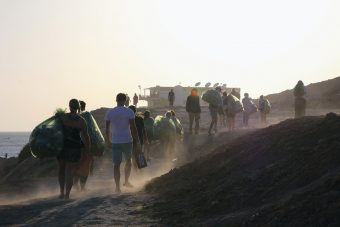 More than 20,000 people from 76 different areas of the country participated in the event, which organizers dubbed “Face the Sea.” The volunteers scoured beaches in Indonesia for plastic trash in order to raise awareness about ocean pollution.

The country only trails China in the amount of plastic it wastes every year. In total, Indonesia produces some 3.2 million tons of plastic trash annually, a quarter of which gets dumped in the ocean. Once the plastic gets into the ocean, currents gather it up and create huge areas of floating garbage. The biggest patch, located in the Pacific Ocean, is twice as large as the state of Texas. Marine life, including fish, whales and birds, often mistake the plastic for food and eat it. The plastic stays in the digestion system of the animal for life and frequently leads to death. If the world continues to waste plastic at this rate, the amount of waste in the ocean will outweigh sea animals by the year 2050.

Fortunately, countries like Indonesia are starting to turn things around by understanding the importance of preserving the ocean. Apart from the recent event, the Southeast Asian country has also promised to decrease its plastic waste by 70 percent over the next seven years.

The government initiated an extra tax on plastic bags two years ago, which cut the country’s plastic bag use in half over the course of just three months. The program is no longer in existence, however, because local businesses claimed it decreased overall sales. Many activists say the low number of successful policies to fight plastic pollution is because of a lack of awareness, which is what the ocean cleanup organizers are hoping to address.