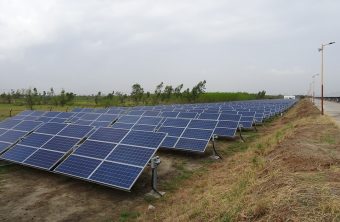 That’s according to a new report from the International Energy Agency (IEA), which also highlights how the country’s total investments in clean electricity exceeded the amount of money spent on fossil fuel power for the third consecutive year.

It notes increased spending on solar power, supported by government auctions, was largely enabled by the falling costs of installing panels, as well as supportive policies.

Despite these renewable successes, India remains one of the world’s largest coal consumers and investment in supply of the polluting energy source is still growing – the majority of its electricity demand is still sourced from fossil fuels.

This is set to grow in the future as population size soars and the country becomes increasingly industrialised.

The IEA report notes India was the fastest-growing investor in the energy sector last year, spending more than $20 billion (£15.8bn) on its grid alone – it suggests this was necessary in order to cope with surging demand.