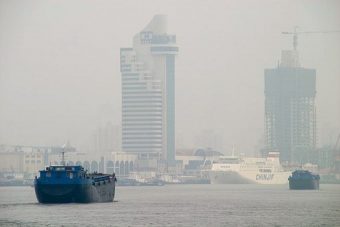 The rising air pollution levels in many of China’s largest cities are having a pronouncedly negative effect on human health there. Though, that much has been known for quite a while now. A new study, however, has unearthed something not unexpected but still worth taking note of — “robust evidence” that rising levels of short-term ozone exposure are ramping up mortality rates considerably.

The new paper — published in the Environmental Health Perspectives journal — utilizes data gathered between the years of 2013 and 2015 in 272 cities in China to link increased mortality from heart disease strokes and cardiovascular disease to short-term ozone exposure.

If you live in a large city, then you’re already acquainted with ground-level ozone pollution — otherwise known as photochemical smog. It is produced through the interaction of sunlight and nitrogen oxides (NOx), which are themselves mostly released from vehicle tailpipes and fossil-fueled power plants. So, this news is probably relevant to you as well, not just to the people in China.

Commenting on the fact that, while particulate matter is a larger cause of disease burden in China, ozone is a very significant cause as well — particularly in certain regions (the Pearl River delta, for instance) — the director of the department of public health at Shanghai’s Fudan University, Kan Haidong, stated: “Ozone has been increasing in the past several years in China. In contrast, PM2.5 has decreased by about 30% in the past 5 years.”

Here’s more from Reuters: “Lauri Myllyvirta, a Beijing-based campaigner with environmental group Greenpeace, said soaring ozone is partly a result of China’s success in reducing PM2.5, which has increased the amount of sunlight, but China has lagged when it comes to tackling NOx and VOCs.

As it stands, very notably, China doesn’t have any official ozone reduction targets on the national level. Perhaps the new study will help cause a change in that regard?