One of the most iconic images depicting the environmental impacts of climate change shows a forlorn polar bear being stranded, or so it appears, on a floating chunk of ice among melting sheets.

As polar ice will carry on melting in coming years and decades, local wildlife will be facing dire consequences. These animals are bound to include walruses. Pacific walrus mothers routinely prefer to give birth ice, just as walruses in general resort to sea ice for nursing, engaging in courtship and resting between dives for food.

What will happen to Pacific walruses with much less ice around troubles conservationists, who would like to see further legal protection extended to the mammals, which can weigh up to 1,900kg, by having them listed officially as “threatened.” That would mean companies engaging in oil exploration within the range of Pacific walruses would be required to consult with federal wildlife officials before they could drill rigs in case those rigs pose a threat to walruses.

Once hunted for their tusks, blubber and meat, walruses today are largely shielded from such practices in Alaska by the Marine Mammal Protection Act, which allows only native subsistence hunters to kill them. Pacific walruses inhabit a snow-bound area in the Chukchi Sea between Alaska and Russia, where females and juveniles spend their summer. Yet as the climate continues to warm, ice sheets in the area could be gone during summers within three or four decades. 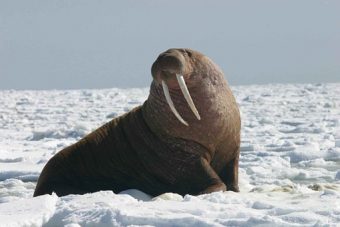 “Since 1981, an area more than double the size of Texas — 610,000 square miles (1.58 million square kilometers) — has become unavailable to Arctic marine mammals by summer’s end, according to the National Snow and Ice Data Center,” the Associated Press explains. “By late August, as sea ice recedes beyond the shallow continental shelf, female walruses and their calves face a choice: Stay on ice over water too deep to reach the ocean floor for feeding — or come ashore for rest periods, where the smallest animals can be crushed in stampedes triggered by a hunter, airplane or bear.”

Changes to the climate could also upset the delicate balance of local ecosystems. Walruses use the summer months for fattening up for winter, with nursing mothers gobbling down some 7,800 clams every single day. Yet scientists have found that females that are forced to rest back on dry land rather than on ice floats in the sea between their feeding forays still preferred to visit their favorite feeding areas out at sea. Reaching those feeding areas, however, required extra energy, which often depleted some of their vital far reserves.

That is a concern because undernourished females, researchers say, tend to bear smaller calves that are less likely to survive. Biologists are hoping that Pacific walruses will be able to adapt to their changing environment. Yet no one knows for certain. “Maybe they can get through that sort of an environment,” notes Chad Jay, a scientist in Anchorage working for the U.S. Geological Survey. “Maybe they can’t.”