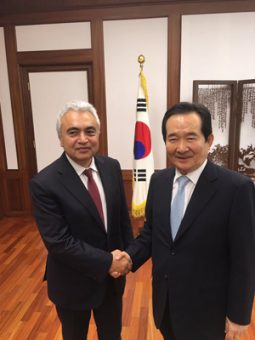 Dr. Fatih Birol, IEA Executive Director, was in Korea on an official visit on 1-2 September 2016.

He met with Mr. Joo Hyunghwan, Minister of Trade, Industry and Energy, with their discussions concentrating on expectations for a re-balancing of global oil markets and on progress countries are making on climate policy since the Paris UN Climate Conference (COP 21) ended last December. They also spoke about recent developments in Korean energy policy, including opening up electricity and gas markets, increasing renewable energy production and improving energy efficiency – all topics much debated in other IEA countries.

Dr. Birol also met with Mr. Syekyun Chung, the Speaker of the National Assembly. Their talks focussed on the implications of developments in global energy markets on Korea’s own energy landscape as well as the efforts underway to modernize the IEA, particularly through closer engagement with countries in Asia.

On the first day of the visit, Dr Birol was in Busan to attend the 17th World Clean Air Congress and 9th CAA Better Air Quality Conference to present the recent World Energy Outlook Special Report on Air Pollution at an event that attracted around 1000 attendees.