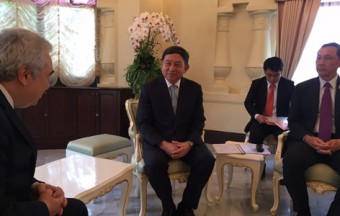 The International Energy Agency (IEA) and Thailand today launched a centre to consolidate high-quality, accurate and comprehensive energy information. Thailand’s Vice Minister of Energy, Nattipon Kanokchot, and IEA Executive Director Fatih Birol unveiled the Thailand Energy Information Centre in Bangkok during an inauguration ceremony attended by high-level government officials, industry executives and members of the diplomatic corps. During the event, deep gratitude was expressed for the IEA’s strong support for Thailand.  While Thailand’s energy data are considered by the IEA to be among the best in Southeast Asia, further efforts through the centre to improve energy data and information will facilitate better energy policy making in the country. To connect the work of the centre to the IEA’s efforts to enhance global co-operation on energy data and statistics, the IEA’s Chief Statistician will take an advisory role as a member of the centre’s steering committee. “I am delighted that Thailand – which became an Associate member country of the IEA in 2015 – invited us to be a partner in the Thailand Energy Information Centre,” said Dr. Birol.

“Thailand shares the IEA’s priorities and goals, and is a leading example for many other emerging economies in areas such as energy security, energy data and energy policy analysis. With the launch of the centre, Thailand will make further progress to meet its ambitious energy policy objectives.” Energy Minister Anantaporn Kanjanarat of Thailand said the centre heralds a new era of engagement between the IEA and Thailand. “This new relationship could enhance Thailand and IEA co-operation in various areas under the Association membership,” he said. “We would like to thank the IEA for supporting Thailand for many years with several co-ordinated activities such as energy emergency response study, data and statistics analysis. We hope that Thailand and the IEA could strengthen our co-operation by working closely in wider-range areas of energy.” The opening of the centre comes just days after Dr. Birol and China’s Energy Minister (Administrator) Nur Bekri jointly announced plans in Beijing to establish an IEA-China Energy Co-operation Centre.

These developments mark important steps in the IEA’s new “open doors” approach towards deeper and wider-ranging collaboration with the emerging economies. Vice Minister Kanokchot said the Thailand Energy Information Centre aims to be an integrated energy information centre and analytical think-tank. He added that the centre will reach out to all stakeholders in the country and “overcome technical barriers” that have in the past created misunderstanding from energy information. “We need to enhance our capacity, and the IEA has been the key partner to support us,” said Vice Minister Kanokchot. During his visit to Bangkok, Dr. Birol met (as pictured) with with the Deputy Prime Minister of Thailand as well as Energy Minister Anantaporn Kanjanarat. Dr. Birol also presented the IEA’s new Thailand Electricity Security Assessment, a report that represents the Agency’s first peer-reviewed engagement with Thailand. The study makes recommendations aimed at enhancing Thailand’s energy security, supporting its transition towards clean energy technologies, improving energy efficiency and developing a regional electricity market.