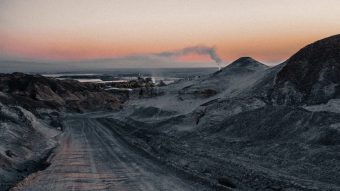 When Sophia Hamblin Wang flew to Davos, Switzerland, in January 2020, swathes of her home country, Australia, was on fire.

“So many of my communities were affected in profound ways. We could feel the impact on a day-to-day basis for a period of three months.

“I can’t begin to tell you how much living through a climate event really made me sure about my path,” she says.

Sophia was at the World Economic Forum’s Annual Meeting as a Global Shaper and the Chief Operations Officer of MCi, a technology platform that transforms CO2 into building materials and other valuable industrial products.

The company has designed and built three carbon reactor systems, including its flagship, a world-first global reference pilot plant in Newcastle, Australia – which transforms waste materials and emissions created by industrial processes – and hopes to lock away 1 billion tonnes of CO2 per annum by 2040.

On our video call, she holds up a piece of plasterboard made by combining CO2 with an abundant low-grade rock called serpentinite.

“This is actually a negative emissions building material – it’s locked away significantly more CO2 than was used to make it. So we’re embedding our emissions into our walls. And there are enough deposits of serpentinite in the world to lock away all of the emissions from fossil fuels that have ever and will ever exist.”

Back in Davos, as the panel discussed decarbonization, Sophia had a moment of realization, that as the youngest person there, she would have a key role to play in seeing the world meet its Paris Agreement targets – reducing emissions to zero by 2050 to limit global warming to 1.5C.

“I was the only person in the room who was still going to be working in 2050. It was the opposite of imposter syndrome. I realized that there was absolutely no other voice like me in this room – and it’s super-important to have diversity in these spaces.”

Ten months on, Sophia is speaking again at the World Economic Forum’s Pioneers of Change Summit, and in spite of the COVID-19 pandemic, the world has come a step closer in its race to zero emissions, with pledges from key economies in recent weeks.

Here, she discusses MCi’s Carbon Capture and Use process and why she’s a passionate advocate for seeing carbon as a valuable resource.

What is mineral carbonation?

Since the Industrial Revolution, we’ve been putting too much CO2 into the atmosphere. And so we know, based upon the IPCC report, and many of the intergovernmental organizations, that we need to reduce our emissions and reach net zero by 2050. But we also know that we’ll probably need to draw down CO2 out of the atmosphere and do something with it. So MCi is developing technology that turns CO2 into usable materials.

We use the Earth’s natural process of storing CO2, which is called mineral carbonation or weathering. Dissolved carbon dioxide reacts with the minerals in rock to produce carbonate, which is stable over a long period of time and can be used in construction. The White Cliffs of Dover in England are an example of Earth’s natural weathering process – over millions of years, CO2 has been absorbed into those cliffs and that’s why they’re white. We’ve just taken that process from millions of years into a matter of hours in an industrial setting. 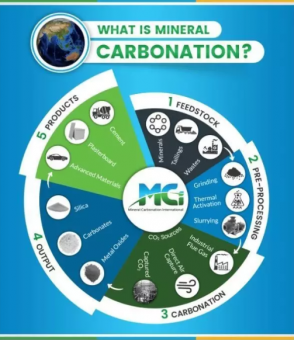 What products is MCi making?

Our technology is like a black box, where you can feed in industrial wastes like steel slags or incinerator bottom ash, or quarried local minerals, lots of different minerals and then a flue gas. We don’t actually need pure CO2, but any kind of gas that may come straight out of a stack pipe, and then we react that in our facility, and we create an output which can be processed into various things. At the pilot plant in Newcastle, Australia we’ve been building and creating carbonate products every day like this cement brick, and plaster board.

It’s a whole circular economy where you treat your waste and turn it into new products. Treating CO2 as a resource and embracing carbon capture and use will, we think, bring about change quicker in harder-to-abate industries in particular. Creating business models out of climate change is quite exciting and it may bring about change to emissions faster than waiting for some governments to legislate, and waiting for behaviour change in markets, which is also very important.

Where do the emissions come from for the process?

In the past decade, the global environment has really taken off with regard to renewable energy. Australia is a resource nation, but we have such a strong capacity for renewables, and we just see the trajectory of renewables to be so healthy, but there are other sectors that really do need decarbonization options that aren’t clear. For instance, the steel industry, the cement industry, chemicals, transition technologies for hydrogen also need options for CO2.

So we’re really looking at this transition medium-term, where we need to be decarbonizing rapidly, all industries, not just energy. And we can do it without a carbon price actually. At our next scale up, we’re already looking at making a profit and that’s quite a significant thing when you compare it to other ways of treating carbon dioxide, like underground storage and similar technologies.

How much progress have you seen in 2020 around decarbonization and does it make you hopeful?

I’ve been working with MCi since 2013 and we’ve been building this technology in commercial secrecy. Seeing a lot of change within global governments and attitudes towards targets, emissions trading schemes, other market-based incentives for carbon has definitely been volatile.

But at Davos this year, I was on a panel called ‘Building a New Carbon Economy’, and we had circular economy titans like Kenneth Rogoff saying carbon dioxide isn’t actually a villain. It can be something that can be used to create lots of valuable products, not just building materials, but chemical feedstocks and fuels and all kinds of things. So that was a real starting gun for technologies like mine.

A lot of the world’s largest companies used Davos to commit to net-zero, negative emissions pledges. Microsoft, Apple, BHP and Rio Tinto had all committed to net zero at that stage, and I just thought, wow, it’s no longer waiting for people and companies and countries to get up to speed, it’s now going to be a race. It’s a race to see which technologies are going to help us meet these ambitious targets. And it’s setting a new standard for what ambition actually is.

#ShapingDavos – What do you hope to achieve at the Annual Meeting? 🌎@SHamblinWang from the Global Shapers Canberra Hub highlights: “I want to show that while there is urgent need for climate action, there is also hope…We have to start now.” #wef20 pic.twitter.com/D1Esi7guXO

What more needs to happen?

Significantly in the last few weeks, Japan, China, South Korea, have all committed to net zero by 2050 – 50 percent of the world’s GDP has signed up to net zero, which is profound. As the world commits to these really crucial targets, it’s time for the technologies to line up, to develop, to accelerate, to run as quickly as we can, in order to get there. We know that we have less than eight years before we hit a tipping point, so the next eight years is the most critical in that trajectory.

The market for carbon capture and utilization has been estimated to be almost $6 trillion per annum and that will grow in the future. If we’re looking for support for technologies like ours for investment, for policy certainty, then it’s really helpful to have market estimations like that and they’re only starting to come out in the next three years. More than half of that is in building products.

What’s next for MCi?

MCi has completed a pilot phase, we are processing a few hundred tonnes of CO2 every year and we’re able to test it in a lot of different settings. Right now, we are focusing on decarbonizing settings like nickel, creating a pathway for sustainable nickel as well as cobalt and lithium and other mining operations, as well as steel, cement and hydrogen. We will be scaling up into a demonstration phase next to make a significant amount of carbonates.

But the real end-goal here is that we want to be locking away 1 billion tonnes of CO2 by 2040 and that is very achievable given the amount of applications where our technology can work. A lot of carbon capture and storage technologies rely on tax rebates and other incentives in order to be worthwhile. We absolutely need mechanisms and incentives. But our technology doesn’t need to wait for that. And in fact, we’ve had to develop our technology whilst having a high ROI because it wasn’t clear how long it would take for our markets to line up behind it. We expect that pension funds and ESG will want to fund our plants.

What advice do you give to business leaders?

Business leaders today know that they need to not only make ambitious climate targets in order to be market leaders, but they need to be thinking about a truly evolved way of considering emissions. So not just your own emissions and scope 1 [direct] and scope 2 [indirect] emissions of their business, but also looking at the way that their full supply chain and ecosystem are also decarbonizing [scope 3]. And we’re really seeing that with the largest companies in the world all starting to really look at decarbonizing these scope 3 emissions.

We’re really interested in that in Australia, because we’re a resource-based nation and we’ve got companies like Rio Tinto and BHP making net-zero-by-2050 pledges, and really considering their scope three. So that’s looking all the way down to the steel manufacturers when you’re an iron ore miner. We need to decarbonize, we need to be ambitious, but also you need to help your whole ecosystem also to do the right thing and reduce and remove our emissions starting now.