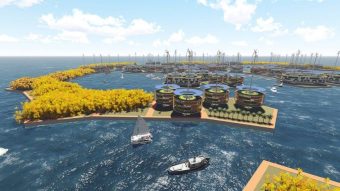 The world got a little closer to the first floating city when the Seasteading Institute signed a memorandum of understanding with the French Polynesian government earlier this year. Not only could floating cities offer a sustainable place to live, but they could also potentially help coral reefs recover and provide a habitat for marine life, according to Joe Quirk, Blue Frontiers co-founder and Seasteading Institute seavangelist. Inhabitat spoke with Quirk and architect Simon Nummy to learn more about the vision for the world’s first floating city.

Quirk told Inhabitat, “We think of cities as being a blight on the land and polluting the oceans. Floating cities are so different because they could actually be environmentally restorative.” For example, an increase in ocean temperatures has caused much of coral bleaching. Quirk said the mere presence of a floating city could help combat this issue. He said, “The corals could actually recover if we could just lower the temperature a little. Our engineers at Blue Frontiers have devised a plan to position the platforms to create some shadows to lower the temperatures. So as the sun moves about, you get enough light on the ocean floor to spark photosynthesis, but you lower the heat just enough to have a restorative effect.”

Solid floating structures can also increase the amount of sea life by serving as a habitat, according to Quirk. He said platform floors, that would be below water level, could be made of glass, creating an aquarium apartment or aquarium restaurant.

There are currently a few visions for what the floating cities might look like from different designers, as seen in the images. Nummy, who won the Seasteading Institute’s Architectural Design Contest, told Inhabitat, “The intent is for an architecture derived from nautical technology and sensibility, combined with a deep respect and willingness to learn from the culture and knowledge of the original seasteaders, the Polynesians.”

The goal is for the floating city, which will be placed around one kilometer, or a little over half a mile, from shore inside a protected lagoon, to be 100 percent renewable and 100 percent self-sufficient. Floating solar panels could help power the city, and Quirk said as water cools panels, they could generate 20 percent more energy than their landlocked cousins. 20 percent of the floating city could be comprised of solar panels. Another goal is to not discharge any water into the lagoon – waste water is to be treated and recycled. Food could be cultivated in sea farming systems.

“Each building strives for energy independence and the architecture results from this; energy efficiency and passive strategies are vital,” Nummy told Inhabitat. “Polynesian architecture is primarily about the roof and we have tried to interpret this in a contemporary, sensitive way that both reflects local precedents while harvesting rainwater and discretely maximizing the opportunities for photovoltaics and vertical axis wind turbines.”

The floating city could be designed to look like a natural island, featuring green roofs and buildings constructed with locally-sourced materials – potentially bamboo, coconut fiber, or local wood like teak. Nummy told Inhabitat, “The buildings are designed to connect to nature and embrace the magnificent Tahitian views. Walls are to be louvred or openable whenever possible.”

2020 is the goal for construction of the floatreing village, which would include around 15 islands 82 by 82 feet. Quirk said the first floating city could be kind of like the first iPhone – rather bulky and expensive – but they aim to drive down the price with later iterations. Two to three years after 2020, they hope to double the amount of platforms – from around 15 to around 30 – and then triple the amount two to three years after that.

Quirk said, “Island nations and coastal nations are already suffering from sea level rise, and this is a realistic way for them to adapt.”