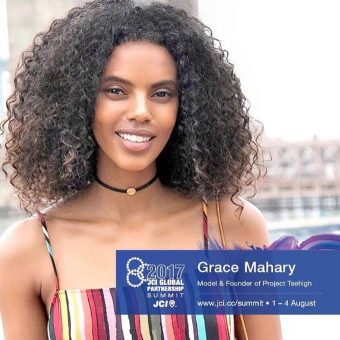 As one of the most in-demand faces in modelling, she scores regular gigs for the likes of Givenchy and Chanel, in addition to having walked down that coveted Victoria’s Secret runway. But when this leggy runway veteran is off-duty, it’s charity that comes first. Her charity, to be precise, which aims to light up impoverished communities the world over – one household at a time – using solar panels.

“I’m very much of a hands-on type of person. I like to be on top of everything and enjoy watching a grassroots movement come to flourishing. I realized that Eritrea could use more financial aid, after visiting the country for the first time a couple of years ago,” the Canadian model whose parents immigrated from Eritrea shares, regarding her decision to start a charity of her own as opposed to joining an existing organization as an ambassador. “So I looked at this as an opportunity. Especially as an Eritrean woman,” Mahary adds.

The model philanthropist’s brainchild Project Tsehigh (Tsehigh means “sun” in Tigrinya and is the name of Mahary’s father), had been in fruition three and a half years prior to starting operations less than a year ago. The charity’s founder currently runs the nonprofit organization alongside her team of four, assisted by a growing crop of volunteers. For the sexy stuff – i.e. the ins and outs of clean energy solutions – she reached out to her uncle, a Germany-based electrical engineer who also acts as the nonprofit organization’s Chief Technology Officer. “I didn’t know much about renewable energy,” the model admits, who’s currently enrolled in an online course to learn more about the topic whilst working as a model. According to Project Tsehigh research, 70% of Eritreans currently live off the electrical grid. Access to electricity would directly improve living conditions of locals, as well as academic results of youths. 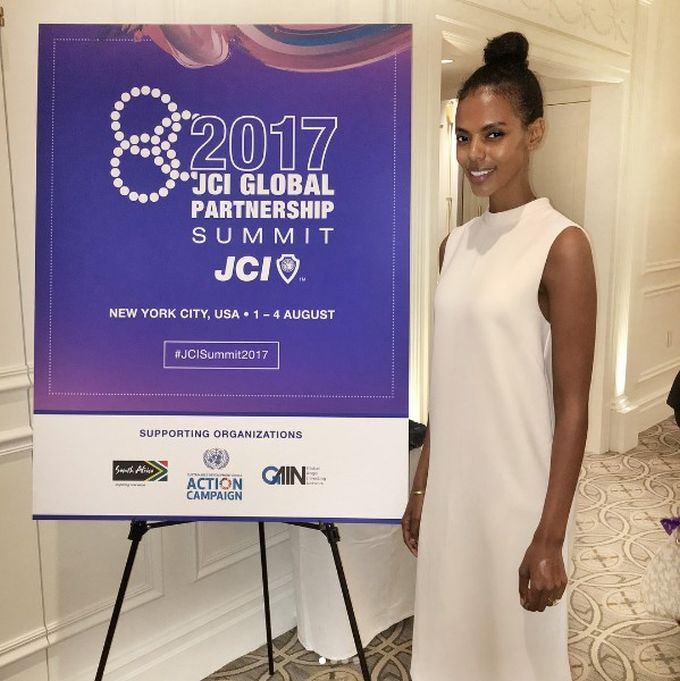 For the year 2017 Project Tsehigh set the goal of raising a five-figure sum, which should cover renewable energy for 100 households in the rural town of Maaya – project Tsehigh’s point of departure. “Maaya is almost two hours away from the capital Asmara. The local community has been very warm and receptive towards us, ever since the first encounter. Of course when they found out that we’d provide them with electricity, they got even more excited,” Mahary says, whose charity has already won the support of serial entrepreneur Russell Simmons. Simmons partnered with the renewable energy project for its second fundraiser, centered around the theme of yoga and meditation.

Said fundraisers which focus on physical activity, have become synonymous with Project Tsehigh’s approach to raising funds and awareness. Its first fundraiser went down in the form of a spinning class and the third, final fundraising event for 2017, is scheduled for fall. “People like this approach, because it’s not like your typical sit-down gala. Because of my background as an athlete, it makes sense to do it this way – it’s very personal. On top of that, I believe that internal clean energy is linked to external clean energy,” the former basketball player comments.

Proceeds from fundraising efforts are used for the manufacturing, shipping, and installation of rooftop solar panels. The first set of solar panels to arrive in Maaya, Eritrea, shall be installed this November. That means a 10W solar panel per household, three light bulbs, and a battery. “The money these households currently spend on non-renewable resources such as candles shall be stored as part of a sustainable plan which allows them to repurchase the solar panel battery and be self-sufficient,” the face of Cushnie et Ochs fall ad campaign says. Mahary concludes, “Our goal is to impact communities. Once we’ve brought renewable energy to these households, schools and hospitals shall follow. Our goal is to impact communities – one community a year.”