Like some other automobiles, the Tesla Model 3 I drive will automatically fake rumble if I start to go out of the lane. It’s a nifty little safety feature. There are times when the car will also beep loudly at me — if it thinks I’m driving into a dangerous situation.

Let’s be honest, though — these kinds of subtle warnings and heart-shocking alerts can only go so far in preventing accidents.

Whole Mars Catalog recently brought my attention back to the topic of “drowsy driving,” something we wrote about back in September 2019. The numbers are mind blowing, even if you’ve seen them before.

According to a study from the AAA Foundation for Traffic Safety, nearly 330,000 car accidents a year occur in the United States due to sleepy drivers. 109.000 accidents result in an injury and 6.400 result in a fatality.

The estimated cost, according to the study’s assumptions for the cost of injuries and premature deaths but not even touching property damage, is 109 billion dollars.

Official figures are much lower, but still shocking. However, the study authors note that, for a variety of reasons, drowsy driving is probably severely under-reported. It estimates there are 350 percent more fatalities linked to drowsy driving than reported.

The official figures from the National Highway Traffic Safety Administration (NHTSA) are: ~100.000 crashes, ~71.000 injuries, and ~1.550 fatalities per year. Even if those aren’t huge underestimates, the numbers are staggering.

Tesla Full Self Driving (FSD), after it advances a bit further in the next two–three years, won’t be perfect and will result in more than 0 crashes, but imagine how many crashes and injuries it will prevent, and how many lives it will save, simply by taking the driving out of the hands of sleepy drivers.

Even without addressing DUI, careless driving, and driving while texting, the number of lives Tesla FSD could help just by addressing the problem of sleepy drivers is very high.

According to another study, “An estimated 1 in 25 adult drivers (aged 18 or older) report having fallen asleep while driving in the previous 30 days.” According to yet another study, “You are three times more likely to be in a car crash if you are fatigued.”

Anyway, the point is clear: don’t sleep and drive. The broader point, though, is one that should probably be highlighted a bit more: don’t sleep and write. Oh, whoops, no. The point is that Tesla Full Self Driving could save a lot of tragedy and a lot of lives once it’s a bit more developed and rolled out to many more people. (I’m waiting.) If it reaches robotaxi levels, the benefits are incomprehensibly large.

Even just the current beta system rolled out to a lot more drivers would be a gigantic benefit, though, and if Tesla is indeed tracking people’s faces, Tesla could also take the extra precaution of making its cars beep loudly if it thinks the driver is falling asleep or has fallen asleep.

Until robotaxi levels, Tesla should be extra cautious with its systems to make sure drivers remain attentive. However, even at current FSD levels, Tesla vehicles can surely prevent so many accidents. 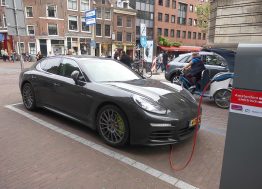