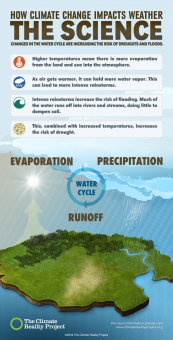 Climate change increases our risk of both heavy rains and extreme droughts. But why – and how – is that? Aren’t the two contradictory?

Science has shown that climate change touches every corner of our planet’s ecosystem, and the water cycle is no exception. Because the processes involved are highly dependent on temperature, changes in one have consequences on the other. Specifically, as global temperatures have steadily increased at their fastest rates in millions of years, it’s directly affected things like water vapor concentrations, clouds, precipitation patterns, and stream flow patterns, which are all related to the water cycle.

So how does climate change impact the water cycle? We’ve created an infographic that illustrates what’s going on, but we’ll describe it here too. Put simply, water evaporates from the land and sea, which eventually returns to Earth as rain and snow. Climate change intensifies this cycle because as air temperatures increase, more water evaporates into the air. Warmer air can hold more water vapor, which can lead to more intense rainstorms, causing major problems like extreme flooding in coastal communities around the world.

But it doesn’t end there. At the same time that some areas are experiencing stronger storms, others are experiencing more dry air and even drought. Like we mentioned above, as temperatures rise, evaporation increases and soils dry out. Then when rain does come, much of the water runs off the hard ground into rivers and streams, and the soil remains dry. The result? Still more evaporation from the soil and an increased risk of drought.