The more the planet warms, the more cities are finding they need new ways to keep urban temperatures down and protect their residents. Heatwaves are already by far the deadliest weather-related disasters in Europe; 140,000 deaths associated with 83 heatwaves have been recorded since the beginning of this century. Today, only 8 per cent of the 2.8 billion people living in places with average daily temperatures above 25 degrees Celsius have an air conditioner. 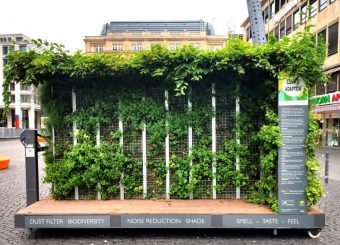 Cooling is particularly important in cities facing rising temperatures, worsened by the urban heat island effect—concrete and tarmac absorbing the sun’s power, radiating it out as heat and keeping the city warm long after the sun has gone down. Waste heat from engines and other energy-consuming equipment in transportation, industry and space cooling make cities even hotter.

The standard solution to cooling in cities is to add more air conditioning, but this brings its own set of problems. Energy-hungry cooling further drives global warming. The number of cooling appliances in use is expected to grow from 3.6 billion today to 9.5 billion by 2050. If air conditioners were provided to all those who need them, not just those who can afford them, there would 14 billion cooling appliances in use by 2050. Emissions would go through the roof.

Many cities, however, are taking bold steps to show that they can keep cool in a sustainable manner, with the Indian city of Ahmedabad chief among them. The city implemented its Heat Action Plan after an extremely hot and deadly pre-monsoon season in 2010. The plan not only set up an early-warning system for the vulnerable. It included water supplies to the public, plants and trees and a “cool roof” initiative to reflect heat. Some 7,000 low-income households have had their roofs painted white, a simple measure that dramatically reduces inside temperatures by reflecting sunlight.

The Heat Action Plan saves an estimated 1,100 lives each year. Its innovative multi-step approach won the 2020 Ashden Award for Cool Cities, which recognizes pioneers in the fight against climate change.

There is a huge body of evidence showing that city-level interventions can greatly mitigate the effects of heat stress. On a typical sunny summer afternoon, a clean white roof that reflects 80 per cent of sunlight will stay about 30 degrees Celsius (55 degrees Fahrenheit) cooler than a gray roof that reflects only 20 per cent of sunlight. The International Energy Agency estimates that well-designed cities could save 25 per cent of the energy they use for heating and cooling.

“In UNEP we look at city planning and design that makes most of passive solutions, bringing nature back into the city,” said Martina Otto, who leads UNEP’s work on cities. “Through a system of well-articulated green spaces, and by greening building facades and roofs and promoting passive building design, cities can modernize traditional construction and help reduce urban temperatures.”

Such city-level plans are increasing across the globe. Cities like Melbourne, Australia, are planning to massively increase their urban forests to increase air quality, provide more shade and reduce the need for mechanical cooling. Milan’s ForestaMi project, meanwhile, aims to plant 3 million new trees in the Italian city by 2030 to reduce urban temperatures by 2 degrees Celsius. And Sierra Leone’s capital city, Freetown, has committed to planting 1 million trees and increasing vegetation cover by 50 per cent by the end of this year, part of an effort to fight climate change and halt deforestation.

In Frankfurt, “green living rooms” have been placed around the city to provide natural cooling from plants. Cities ranging from Stockholm to Tokyo are turning to modern district cooling to save energy and money.

Hosted by UNEP, the Cool Coalition –a network of major global players with a common purpose of accelerating the transition to sustainable cooling – is supporting countries to integrate cooling in their national plans to combat climate change.

“Nature-based solutions are a key part of the Cool Coalition’s approach to minimize emissions from the cooling sector,” said  Dan Hamza-Goodacre from the Kigali Cooling Efficiency Program. “Cities are leading the way in implementing nature-based solutions to fight climate change. The solutions are reducing the costs of cooling, slowing greenhouse gas emissions, helping cities to adapt to climate impacts, addressing biodiversity loss and protecting human health –  an amazing set of benefits.”