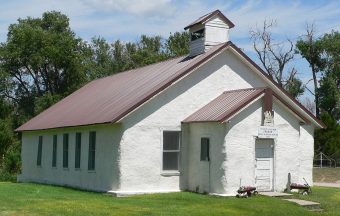 For thousands of years, people have used straw to build their homes. According to scientific knowledge, even African tribes from the Stone Age made houses of this material. The most significant advance in the mentioned type of construction was made in the mid 19th century when the inventors developed the straw-bale technique. The invention of special machines enabled the production of light, biodegradable blocks of exceptional isolation capacity.

One of the first buildings of straw was the school in the federal US state of Nebraska that suffered an ignominious fate. In 1902, the school walls were eaten by cows. Although the animals browsed this educational institution, the builders of that time learned a valuable lesson. Since then, builders have begun to cover objects made of straw, with cement, mortar or mud.

With the advent of rapid industrialization and new building materials, the trend of straw-bale construction disappeared in order to experience a rapid boom in the early twenties of the last century. Thanks to the significant savings achieved with the use of baled straw, this construction technique attracted the attention of architect Goran Milenkovic. He wrote a book “Straw-bale construction” together with professor Slobodan Krnjetin from the Faculty of Technical Sciences in Novi Sad.

“In the nineties of the 20th century, by developing global awareness of environmental pollution and awakening concern because the construction sector in the total global energy consumption has a share of as much as 40 per cent, as well as transport and industry, the construction of baled straw got into stride in The United States, Europe and Australia”, said Goran.

The book describes different construction methods, and each of them provides longevity and stability, provided that walls are well insulated from moisture and other harmful external conditions. Even though the straw decays in the soil in 6 months, in optimal circumstances – on dry, it subsists up to three thousand years.

Under appropriate conditions that are not difficult to provide, facilities made of straw provide their customers with many benefits. Goran stressed out that excellent thermal insulation properties of straw provide 70 to 90 per cent lower energy consumption for space heating compared to classical buildings. “Heat comfort and energy efficiency meet standards three times more than prescribed. The price of a building per square meter is between 20 and 30 per cent lower compared to classical construction. It is important to note that the wall of baled straw covered with the finishing layer of lime mortar is characterised by excellent sound insulation and fire resistance in the duration of 90 to 120 minutes and the achieved temperature of 1,000 °C. In addition, air quality is better because there is no emission of harmful gases from the walls. The process of material production requires a small amount of energy, which greatly contributes to the energy efficiency of the constructed facilities. Due to its high elastic properties, the material behaves like a “silencer” gives great resistance to earthquakes,” our interlocutor pointed out, adding that the straw bale has an incredibly low price of around 60 dinars.

“Houses of baled straw breathe and are pleasant to live in. Materials in nature best regulate the reception and release of moisture, so they mitigate sudden temperature changes.  Straw reduces electromagnetic smog due to the long stems pressed in all directions. After the installation and plastering, it becomes inert and the possibility of developing any allergic reactions to the material disappears. Such houses have excellent sound insulation, because the straw bales are elastic, allowing them to absorb sound vibrations. Most people say their sounds are louder in the interior of the building, which is due to better isolation of the sounds from the background noise coming from the environment,” Goran explained to us and mentioned examples where in addition to private houses, kindergartens, and even churches are built of straw around the world.

We took the opportunity to check the accuracy of the entrenched statement that the straw represents hotbed for pests. Goran denied these claims by the following arguments: “This thesis does hold water. Rodents do not eat straw, and hard-pressed bales with a density of 90 to 100 kg/m³ are strong more than enough to resist their attack. Straw, unlike hay, does not contain nutrients, so it does not attract insects either. Parasites are mainly looking for openings, nesting areas and food, and the properly dislocated wall of baled straw does not offer any of it.“ As a measure of intensified precaution and additional binding of binders to straw buildings, Milenkovic recommended the installation of thickly knitted, thin meshes in plaster on all the joints of the foundation and the wall, as well as on the upper joints of the wall and the roof structure.

Read the whole article in the new issue of the Energy portal Magazine on ENERGY EFFICIENCY, June 2018. – August 2019.