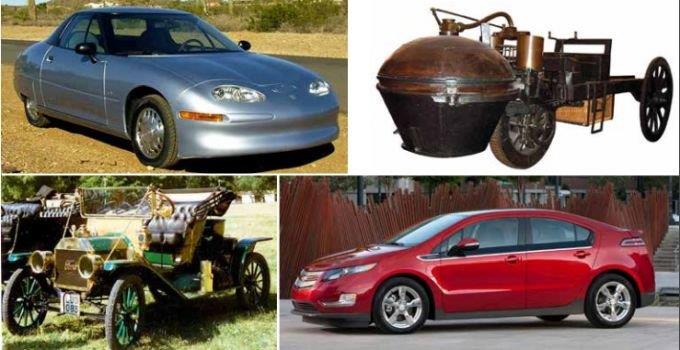 When it comes to cars today, it mainly refers to vehicles with an internal combustion engine (ICE) that draws its energy from a reservoir containing some kind of fossil fuel (gasoline, diesel or less natural gas). However, it is not known that the situation was quite different 100 years ago.

At the beginning of the 20th century, you could find steam cars, electric vehicles, as well as the vehicles with an internal combustion engine. Of all these types of vehicles, the most common were electric ones. The reason for this was the fact that vehicles with ICE had to be physically started by turning the crank, which was a difficult task. With the invention of electromechanical ICE starter, this problem was solved.

The main advantage of the ICE was the amount of energy that could fit into one tank, which directly affected the distance that the vehicle could go without having to fill in the tank. In addition, fossil fuel sources (in the first place, oil) seemed almost inexhaustible. It was these reasons why vehicles with ICE quickly expelled electric vehicles from use and during most of the 20th century, they represented the only option.

However, as the number of cars in use increased, the negative sides of the ICE were also displayed. Primarily, air quality and noise level in urban areas have deteriorated significantly with the increase in the number of motor vehicles. In addition, the social awareness of global warming, as a consequence of human action has been increasing year in year out.

Bearing in mind, besides all this, the inevitable limitations of oil reserves, a motivation arose to find alternatives to ICE engines. Thus, electric vehicles came back to the center of attention.

The first attempts in the recent history to produce an electric vehicle were in the early 1990s. In 1996, General Motors introduced the electric vehicle model in serial production under the name “EV1”. Over the next three years, this model was sold in more than 1,000 units. However, due to the limited battery technology at that moment, the manufacturer decided to stop the production of this model.

The main problems were a gradual decrease in battery capacity over time, and therefore a decrease in the autonomy of the vehicle. In addition, the initial range of vehicles was about 100 kilometers, which made the vehicle unsuitable for long journeys. For these reasons rises the idea of combining classical technology (ICE and reservoirs) with environmentally friendly technologies (electromotor and battery).

The first hybrid electric vehicles originated from this idea. The first mass-produced hybrid vehicle – Toyota Prius – appeared on the Japanese market in December 1997. Over the next three years, this vehicle was sold in more than 50,000 units. Until today this vehicle has achieved the greatest commercial success of all hybrid electric vehicles with a total of 6.1 million units sold worldwide. The main advantage of this vehicle is the ability to use exclusively battery power in the city environment and at the same time, at higher speeds and longer journeys, an ICE would automatically be switched on to charge the battery through the generator. Since the vehicle contains a reservoir, the problem with the range has been solved.

However, the next challenge was reflected in the impossibility of charging the battery without the participation of an ICE and the use of fossil fuels, which brought their negative sides with them. For this reason, there has been the development of the idea of hybrid electric vehicles that could be charged from the electricity grid.

Today “plug-in” hybrid electric vehicles (abbreviated “PHEV”) or hybrid electric vehicles that can be charged directly from the electricity grid are increasingly represented on the market. The most famous representatives of this group of vehicles are Chevrolet Volt (sold in Europe under the name of “Opel Ampera”) and “Mitsubishi Outlander PHEV”, which together have over 260,000 units sold in the previous four years.

The main advantage of these vehicles is the fact that for most of the everyday needs of users, it is not necessary to use fuel at all. Most of these vehicles have a battery autonomy of about 50 kilometers, which meets the needs of an average consumer. This means that these vehicles could be used during the day for journeys shorter than 50 kilometers and when the day is over, they are left to be charged overnight when the price of KWh of electricity is lower and the power grid is unburdened.

However, the compromise is that it is still necessary to use fuel for longer journeys. In addition, for the use of this type of vehicle (as well as completely electric vehicles), it is necessary that there is a developed infrastructure of public stations for their charging.

Although “plug-in” hybrid electric vehicles are at the top of the technology of motor vehicles, they nevertheless represent only a transition stage. Their main advantage is that they have a much higher range (about 800 km) compared to conventional electric vehicles (typically about 200 km). The main reason for a short range of electric vehicles is low battery capacity in relation to their weight and dimensions. The ratio between the amount of energy contained in 1 liter of fuel and lithium-ion batteries (as used in electric vehicles) of the same dimension is as much as 100:1.

The advantage of electric over ICE (engines) is significantly higher utilization rate (60-80 percent for electric versus 15-20 percent for ICE engines). Yet, it is still not enough for an electric vehicle to have the same range as a vehicle with an ICE engine. In order to achieve this, it is necessary that the ratio is closer to 5:1, which requires a lot of investments in the development of new technologies for the production of batteries so that they have as much energy density as possible and the best possible price.

The fact is that over time hybrid or fully electric vehicles will be increasingly represented on the streets and that the number of such models will only increase in the future. It is also clear that this will not happen overnight, but this is a process that can last for decades. What will speed up this process is the will of the society to accept and support these changes.

EU members have signed Europe 2020 strategy, a document in which one of the main objectives is to turn to renewable energy sources. At the end of 2016, the upper house of the German federal parliament (Bundesrat) announced that it intends to abolish the sale of diesel and gasoline vehicles from Germany in 2030. The Norwegian Government has expressed similar intentions.

These efforts will contribute to making electric vehicles available to everyone in the future and able to meet all the needs of people for economy and ecological transport. As far as our country is concerned, we are still lagging behind in comparison to developed countries. The will exists on all levels, but when it comes to realization, it is very bad.

For this reason Energy Portal decided to choose ECOMOBILITY as the main topic for this edition of the bulletin, with the idea to set Serbia in motion with joint forces when it comes to green traffic, or to have a direct influence on official institutions to introduce incentives for importers and buyers of electrical, hybrid and low fuel consumption vehicles, to start the development of the infrastructure of electric chargers and the production of alternative fuels, but also to reinforce the awareness of a common man that energy efficient and environmentally friendly vehicles are the only correct way if we want to preserve the environment for future generations.