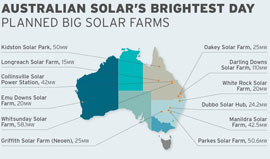 Twelve new large-scale solar photovoltaic (PV) plants are set to be constructed across Australia, tripling the amount of energy produced from utility-scale solar.

The 12 PV projects totaling 482 MW have been chosen as part of the Australian Renewable Energy Agency’s (ARENA) multi-million dollar large-scale solar round. They are expected to unlock almost USD 1 billion of commercial investment and boost regional Australian economies.

“ARENA is working to accelerate Australia’s shift to a sustainable, affordable and reliable energy future and our work supporting the development of Australia’s large-scale solar industry is central to this vision,” Frischknecht said.

Six PV plants in Queensland, five plants in New South Wales and one plant in Western Australia are slated for funding, in a major milestone that’s expected to triple Australia’s large-scale solar capacity from 240 MW to 720 MW.

“They will provide enough energy to power 150,000 average Australian homes and deliver one tenth of the new capacity required to meet Australia’s 2020 renewable energy target. Regional economies will benefit massively from the growing big solar industry, with 2,300 direct jobs and thousands more indirect jobs expected to be created by this round,” Frischknecht added.

“It is now up to successful companies to deliver these projects in line with ARENA’s requirements, which could see all plants built by the end of next year. This is an aggressive timetable to lock in financing, off take arrangements, connection agreements and required approvals. Several are seeking debt financing for projects through the Clean Energy Finance Corporation’s complementary large-scale solar program.”