Cities across the world are rushing to install charging points to encourage and keep up with demand from increasing numbers of electric vehicles. By the end of last year there were almost 600,000 street charging points globally. 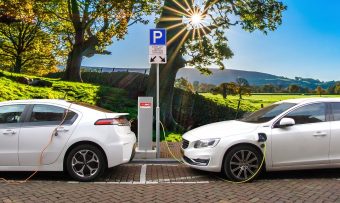 But while some cities, such as Paris, are introducing charging points inconspicuously, many others are not. In some areas of London chargers have been taking over pavements and blocking pedestrians.

Any reduction in pavement width make it harder for people with disabilities to move around, adds disability charity Transport For All.

In Britain, the government is offering incentives for charging points and many local authorities are embracing the technology.

Across London some charging points are taking space away from pedestrians and blocking the way for those with buggies, prams and wheelchairs.

In US cities, many charging points are in car parks rather than pavements.

Sweden and China are taking a different approach and opening roads that charge electric vehicles as they travel, reducing the need for on-street charging units.