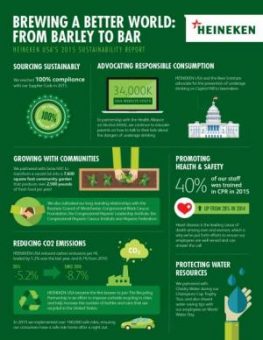 Heineken has released a new sustainability report, and also an interactive experience that not only promotes the company’s achievements, but also encourages the visitor to go further. Called Brewing a Better World, it tells readers about the sustainability achievements of the US arm of the company in 2015 and also allows them to test their green skills.

Some of the highlights include the fact that in 2015 Heineken became the first brewer to join The Recycling Partnership. The company managed to reduce emissions per hectoliter traded by 8.7 percent since 2010. Safety was also a concern and it promoted safe rides home by offering more than 100,000 rides throughout the year. It donated over $500,000 to causes that are close to U.S staff and business. It also partnered with Grow NYC to transform a vacant lot into a 7,600 square foot community garden that produces over 2,500 pounds of fresh food per year.

As users interact with Brewing a Better World, they are challenged to balance their will to compete with taking care of the world. For instance, they can steer a ship through the high seas efficiently to reduce CO2 emissions, or rally friends to recycle empty bottles in a bar.

The story gets better, though. As users conquer every level of the challenge, Heineken USA will track the engagements. If 1,000 users engage with the report, Heineken USA will donate up to $50,000 to the Closed Loop Foundation, an organization that researches and provides funding for cities, innovators and businesses that are working on projects to improve the economic and environmental impact of the circular economy. The grant will help the Closed Loop Foundation initiative to study and improve glass recycling across North America.