People love meat. The trouble is that meat production, especially red meat production, is a major driver of climate change and environmental destruction. Red meat requires 28 times more land to produce than pork or chicken as well as 11 times more water. Beef production also leads to five times more greenhouse gas emissions, particularly in the form of methane. This matters because all in all greenhouse gas emissions from agriculture amount to a quarter of climate change-inducing emissions. 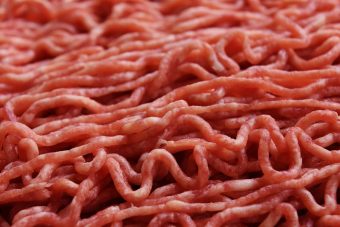 So teams of researchers have come up with an answer: growing meat in the laboratory. By doing so, they argue, we can drastically reduce the environmental impacts of those juicy stakes on our plates.

Turns out, though, that this might not be the case, according to a new study by experts at the Oxford Martin School of Oxford University in the United Kingdom. The researchers examined the climate impacts of several production methods for lab-grown and farmed beef, based on the differing levels of greenhouse gases produced and how these gases would impact the climate long-term. Their finding: replacing cattle with cultured meat may not translate into a simple equation whereby a high-impact method is replaced with a low-impact one.

In other words, in order for “labriculture” methods of producing beef to become viable forms of low-impact substitutes for farmed beef, they will have to become more efficient. “We conclude that cultured meat is not prima facie climatically superior to cattle; its relative impact instead depends on the availability of decarbonized energy generation and the specific production systems that are realized,” the researchers explain.

“There has been a great deal of public interest in cultured meat recently, and many articles highlight the potential for substituting cattle beef with cultured meat to provide an important climate benefit,” lead author Dr. John Lynch elucidates. “We show that it is not yet clear whether this is the case, partly because of uncertainties about how cultured meat would be produced at scale. An important issue in comparing farmed and cultured beef is that the different warming impacts of greenhouse gases are also not well accounted for in the standard measure used in carbon footprints.”

According to estimates produced by the researchers, tallying up carbon-dioxide equivalent footprints can be misleading because not all greenhouse gases generate the same amount of warming or have the same lifespan in the atmosphere. “Cattle are very emissions-intensive because they produce a large amount of methane from fermentation in their gut,” notes co-author Raymond Pierrehumbert, a professor of physics at Oxford.

“Methane is an important greenhouse gas, but the way in which we generally describe methane emissions as ‘carbon dioxide equivalent’ amounts can be misleading because the two gases are very different,” Pierrehumbert explains. “Per tonne emitted, methane has a much larger warming impact than carbon dioxide; however, it only remains in the atmosphere for about 12 years whereas carbon dioxide persists and accumulates for millennia. This means methane’s impact on long-term warming is not cumulative and is impacted greatly if emissions increase or decrease over time.”

However, that does not mean that the idea of growing meat in the lab so as to reduce methane emissions should be dead in the water. There are 1.5 billion or so heads of cattle in the world and raising all those animals requires vast swathes of grazing land. Much of that land has been reclaimed from forests. By growing beef in the lab, we could free up large portions of that vast land area and reforest them. That way we could boost biodiversity and also use these new forests as natural carbon sinks.

A key issue will be to produce lab-grown meat at low environmental costs, including sustainable energy sources. “The climate impacts of cultured meat production will depend on what level of sustainable energy generation can be achieved, as well as the efficiency of future culture processes,” Lynch stresses.