An unusually dry winter, with less than average rainfall interspersed with localised flooding in some areas, is emerging as a major contributing factor to the wildfires that are ravaging the mainland of Greece. 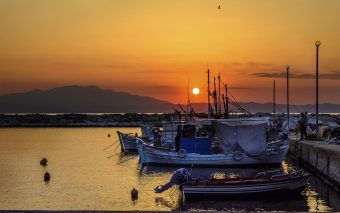 Lack of the expected steady rainfall in the winter months meant groundwater sources failed to recharge and left vegetation unable to recover fully from the high temperatures of the 2017 summer. As a result, when temperatures topping 40C hit some areas during this summer’s heatwave and drought, the conditions were already in place for wildfires to take hold.

Strong winds then fanned the flames and spread the fires widely before stretched fire-fighting teams could gain control. The fact that the fires took hold on land close to densely inhabited and resort areas was largely a matter of chance, but one that led to a death toll of more than 70 people and wrought devastation on homes.

These are widely regarded as the short-term causes of the fires, but experts are also concerned that the conditions experienced in Greece in the last two years are likely to be replicated more often in future, owing to the changing climate.

Nikos Charalambides, executive director of Greenpeace Greece, said: “As the death toll rises and the full size of the disaster is still to be recorded, it would be premature to attribute these [fires] to either climate change or the failures of the fire prevention and fire-fighting mechanisms.”

However, he said the contributing factors included drought, strong winds and unusually high temperatures, all of which are likely to be aggravated by climate change.

The current heatwave across Europe and much of the northern hemisphere could be seen as “a foretaste of what weather extremes we are threatened by as the climate crisis progresses”, said Charalambides.

Growing more trees and managing forests properly would help to make the land more resilient to droughts, heatwaves and fires, he added. Forests also act as a cooling factor on the local climate and support a range of biodiversity.

Charalambides also called for a greater focus on the prevention of fires in Greece in place of a traditional focus on boosting firefighting capacity. Alongside this, there should be more emphasis on drawing up plans for evacuation in the case of disaster, particularly in areas where pine forests are near to human habitation.

Rachel Kennerley, climate campaigner at Friends of the Earth, said: “The immediate priority must be to tackle the terrible fires, and to support the people whose homes, lives and livelihoods have been put at risk or devastated.”

But she said the longer-term impacts must also be taken into account when the immediate danger has passed: “Extreme heatwaves are predicted to become more frequent as climate change takes hold, meaning drier forests and countryside, and a greater risk of fire. Politicians must wake up to the extreme weather battering the planet and take tough and urgent steps to slash the climate-wrecking pollution being pumped into our atmosphere.”

Ray Rasker of Headwaters Economics, an expert on wildfires and the built environment in California, said buildings in high-risk areas could be made more resistant to fires in future, often through relatively simple measures. He cited nonflammable roofing material and siding for houses, not using wooden decks, installing fine mesh screens on roof vents, and planting fire-resistant vegetation close to houses.

He also warned that in the aftermath of large fires there is often a temptation to waive or loosen high building standards in order to rebuild as quickly as possible, which he said would be a mistake.

The short-term Met Office forecast for Greece is for temperatures from around 26C to around 30C, with some localised thunderstorms and a small amount of rainfall in a few areas.