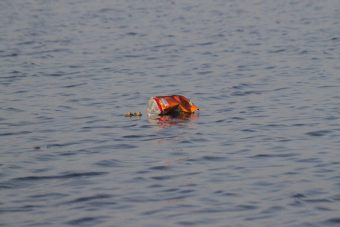 An enormous area of rubbish floating in the Pacific Ocean is teeming with far more debris than previously thought, heightening alarm that the world’s oceans are being increasingly choked by trillions of pieces of plastic.

The sprawling patch of detritus – spanning 1.6m sq km, (617,763 sq miles) more than twice the size of France – contains at least 79,000 tons of plastic, new research published in Nature has found. This mass of waste is up to 16 times larger than previous estimates and provides a sobering challenge to a team that will start an ambitious attempt to clean up the vast swath of the Pacific this summer.

The analysis, conducted by boat and air surveys taken over two years, found that pollution in the so-called Great Pacific garbage patch is almost exclusively plastic and is “increasing exponentially”. Microplastics, measuring less than 0.5cm (0.2in), make up the bulk of the estimated 1.8tn pieces floating in the garbage patch, which is kept in rough formation by a swirling ocean gyre.

While tiny fragments of plastic are the most numerous, nearly half of the weight of rubbish is composed of discarded fishing nets. Other items spotted in the stew of plastic include bottles, plates, buoys, ropes and even a toilet seat.

“I’ve been doing this research for a while, but it was depressing to see,” said Laurent Lebreton, an oceanographer and lead author of the study. Lebreton works for the Ocean Cleanup, a Dutch-based non-profit that is aiming to tackle the garbage patch.

“There were things you just wondered how they made it into the ocean. There’s clearly an increasing influx of plastic into the garbage patch.

“We need a coordinated international effort to rethink and redesign the way we use plastics. The numbers speak for themselves. Things are getting worse and we need to act now.”

Plastic has proven a usefully durable and versatile product but has become a major environmental blight, tainting drinking water and rivers. Around 8m tons of plastic ends up in the oceans every year, where it washes up on beaches or drifts out to sea where the pieces very slowly break down over hundreds of years.

Larger pieces of plastic pollution can entangle and kill marine creatures, while tiny fragments are eaten by small fish and find their way up the food chain. Plastic often attracts toxic pollutants that are then ingested and spread by marine life. It’s estimated there will be more waste plastic in the sea than fish by the year 2050.

Much of the plastic waste accumulates in five circular ocean currents – known as gyres – found around the globe. The Ocean Cleanup has pledged a “moonshot” effort to clean up half of the Great Pacific garbage patch within five years and mop up the other rubbish-strewn gyres by 2040.