Under the new plan, the existing 65-year-old pipelines, which are part of Enbridge’s Line 5 carrying oil and liquefied natural gas between Wisconsin and Ontario, will be replaced with a new pipeline in a tunnel to be drilled into the bedrock beneath the Straits of Mackinac connecting Lakes Huron and Michigan, The Associated Press reported. The project will take seven to 10 years to complete and cost as much as $500 million. Enbridge will foot the bill. 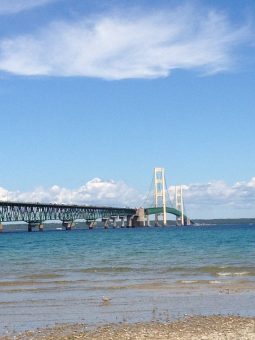 Michigan Governor Rick Snyder called the proposal “a common-sense solution” to the problem posed by the aging pipelines, saying that it would resolve “nearly every risk” of an oil spill in the Straits of Mackinac.

But environmental groups, who have long opposed the pipeline, disagreed that the new plan was any sort of solution.

“Today, Governor Snyder cemented his disastrous legacy for the Great Lakes and the people of Michigan,” Michigan organizer for Clean Water Action Sean McBearty told The Detroit Free Press. “As his administration comes to a close, he announced a last-minute deal with Enbridge Energy that will succeed in keeping the Great Lakes at risk from a massive Line 5 oil spill for the foreseeable future.”

Mike Shriberg of the National Wildlife Federation also told The Associated Press that the plan would leave the body of water vulnerable to spills for many years, and David Holtz of Oil and Water Don’t Mix said that Michigan’s own studies showed there were better ways to provide the state with energy.

Enbridge said it would take measures to reduce the risk of an oil spill from the older pipelines during construction, including (a) conducting underwater investigations, (b) placing cameras in the straits to keep track of ship movements and enforce a no-anchor zone, and (c) making Enbridge staff available to manually shut down the pipeline during high-wave days if electric mechanisms fail.

The Line 5 pipelines have been the subject of lawsuits and protests in recent months. The National Wildlife Federation and the Environmental Law & Policy Center sued the Coast Guard in August over an inadequate oil-spill response plan, in an ultimate bid to shut down the pipeline, since one is not allowed to operate a pipeline without a satisfactory response plan in place. Also in August, indigenous activists set up a protest camp in Northern Michigan to protest the pipelines.

A study in July found that an oil spill from the pipelines could damage 400 miles of Great Lakes shoreline and cost Michigan $2 billion.