The outlook for the Great Barrier Reef has deteriorated from poor to very poor according to an exhaustive government report that warns the window of opportunity to improve the natural wonder’s future “is now”. 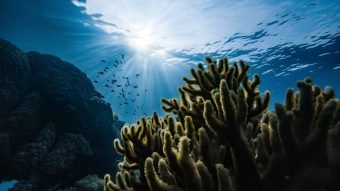 It warns the plight of the reef will not improve unless there is urgent national and global action to address the climate crisis, which it described as its greatest threat.

The report says rising sea temperatures and extreme events linked to climate change, such as the marine heatwaves that caused mass coral bleaching in the northern two-thirds of the reef in 2016 and 2017, are the most immediate risks.

Other major threats include farming pollution, coastal development and human use, such as illegal fishing. The report says water quality is improving too slowly and continues to affect many inshore areas, largely due to farming practices that had not improved rapidly enough.

“Without additional local, national and global action on the greatest threats, the overall outlook for the Great Barrier Reef’s ecosystem will remain very poor, with continuing consequences for its heritage values also,” the report says.

“The window of opportunity to improve the reef’s long-term future is now.”

The authority’s chief executive, Josh Thomas, said the reef was widely recognised as one of the best managed marine protected areas in the world and its world heritage values remained intact, but it was at a critical point in its history.

“While the reef is already experiencing the impacts of climate change, its future is one we can change – and are committed to changing,” he said.

The report maps the health of the reef, which it says has declined from what was described as a crossroads in 2009 to “under pressure” in 2014 to being a “changed and less resilient reef” in 2019.

It says not all areas of the reef have been equally affected and the challenge to restore the reef is big, but not insurmountable. It would require action to effectively address the climate crisis and effective implementation of the government’s 2050 reef plan.

The environment minister, Sussan Ley, said the reef had been hit over the past five years by two mass coral bleachings, several cyclones, an ongoing crown-of-thorns starfish outbreak and the impacts of climate change. She said the “very poor” outlook was something “we can change and are committed to changing”.

Other key findings of the report include that: seagrass meadows are in poor condition; some species populations are being substantially affected by habitat loss and degradation; the size of the reef is becoming a less effective buffer to widespread and cumulative impacts; reef-dependent economies need to prepare for the impacts of a less diverse ecosystem caused by rising ocean temperatures.