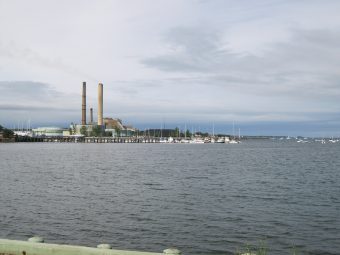 The government has indicated it will act to allow the Clean Energy Finance Corporation to finance new coal-fired power plants on the basis that these coal plants have lower emissions than existing coal power plants.

While such power plants may have lower emissions than Australia’s ageing and extremely inefficient existing coal plants, they would most likely increase Australia’s emissions rather than decrease them. And this is in a context where Australia’s electricity supply is the second most polluting in the developed world (beaten only by Estonia).

The new coal power plants the government is promoting as clean emit around 700kg to 750kg of CO2 for every megawatt-hour of electricity they produce. Is that really worthy of the term “clean” and would it help reduce our emissions?

To help you judge, the chart below shows how such a power plant compares to the emissions intensity of not just Australia’s existing coal plants and also Australia’s overall grid’s emissions intensity in 2016 (taking into account the power it also gets from gas, hydro, wind and solar). On that basis the plant looks somewhat cleaner. But is that the right benchmark?

With the closure of the Hazelwood coal-fired power station shortly, there will be a significant improvement in Australia’s electricity supply emission intensity. In addition, by 2022, which is probably the earliest point a new coal power plant could be built, Australia will have added a significant amount of new zero-emission power plant capacity from wind and solar to meet the renewable energy target.

Using the government’s own analysis of future emissions based on existing policies, our grid’s emissions will be lower than these so-called clean coal power plants.

So the government’s plan for the Clean Energy Finance Corporation to fund new coal plants would most likely make Australia’s emissions worse. And by international benchmarks it looks appallingly emissions intensive.