Back in the early 1970s, Denmark got almost all its energy from imported oil. Then came the oil crisis, which, naturally, had a big impact. Political discussions throughout the ’80s resulted in two big strategic decisions. One, Denmark would develop its own North Sea oil and gas resources. Two, it would implement a green energy transition, or grøn omstilling, to get off fossil fuels entirely. Both strategies meant it would never again suffer at the mercy of international oil markets. Here’s how the first strategy has gone: 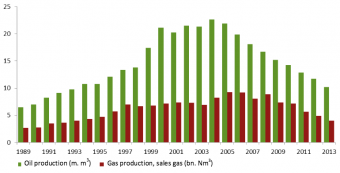 This enormous surge in energy production made Denmark a net energy exporter for many years, until 2013, when it once again became an importer:

Here’s a graphic from a presentation on Denmark’s energy efforts: 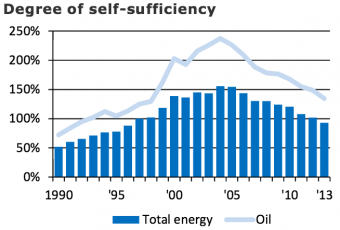 Denmark boasts unusually high wind speeds, so they’ve built the hell out of wind turbines. Wind hit 42 percent of total Danish power in 2015 and is targeted for 50 percent by 2020. 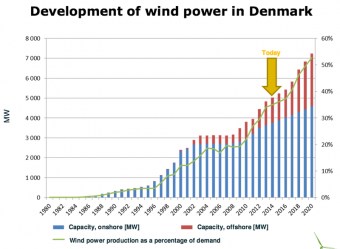 Onshore wind is now, according to a government analysis, the cheapest form of electricity available in Denmark, about half the cost of new coal or natural gas plants. Denmark also has lots of natural gas (from the North Sea), biomass, and organic waste, so it made a concerted effort to encourage CHP. Now 80 percent of Danish heating co-generates electricity, and more than 50 percent of electricity is co-generated with heat. It’s the most extensive CHP system in the world. CHP only counts as “renewable” if it burns straw, wood chips, wood pellets, biogas, or waste. The vast bulk burn natural gas. To allay concerns about the use of biomass for electricity, in 2014. the country announced that it would only purchase sustainable biomass.