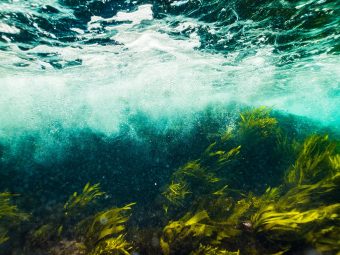 Kelp, which most of us refer to as seaweed, may be an important tool in the quest to limit the effects of a warming planet. Much of the carbon dioxide emitted into the atmosphere by humans — primarily by extracting and burning fossil fuels — is absorbed by the world’s oceans. Too much carbon dioxide and the water in the oceans becomes acidic. Studies show the oceans have absorbed 90 percent of the extra heat pumped into the atmosphere by humans over the past 40 years.

Plants and animals that live in the ocean are exquisitely adapted to the primary factors in their environment — salinity, temperature, and acidity. If any of them change significantly, the organisms can adapt but the process may take centuries or even millennia to complete. Rapid ecological changes simply lead to extinction. For instance, more acidic ocean water is already making it harder for shellfish to create the shells they need to survive. Acidic waters dissolve the shells before they can form and harden, leaving the animals inside vulnerable to predators. Some researchers suggest we should pay more attention to alleviating the warming and acidification of the oceans and less to geoengineering the atmosphere.

In Maine, rising acidity is affecting blue mussels, an important cash crop for local fisherman. The Bigelow Laboratory for Ocean Sciences located in East Boothbay, Maine, is working with those fishermen to find ways to stabilize the blue mussel population. The key is kelp, which use the dissolved carbon dioxide in the water as a nutrient. The kelp can actually reduce the acidity of the water around it, creating a temporary “halo” area of improved water conditions that can benefit other sea life in the area — like blue mussels.

This week, the Bigelow laboratory announced it has received nearly USD 900,000 in funding from the World Wildlife Fund and the Bezos Earth Fund. “This past year has been the warmest on record. At the same time, the global pandemic has exacerbated food insecurity and disrupted Maine’s seafood economy,” says senior research scientist Nichole Price. “It is as important as ever to seek pragmatic, profitable solutions to environmental problems that can also yield nutritious food.” If people are thinking of eating insects as part of a healthy diet, why not kelp?

Until now, research on how marine photosynthetic organisms mitigate climate change and sequester carbon — referred to as “blue carbon” — has focused on sea grasses, salt marshes and mangroves.

“The role of kelp aquaculture has been relatively unexplored, despite its great potential to reduce carbon dioxide concentration and seawater acidity with benefits for the shellfish industry and surrounding coastal areas,” says Aurora Martinez Ricart, a Bigelow Laboratory post-doctoral researcher and co-investigator on the project.

Alongside partners from the Island Institute and the University of New Hampshire, Price has been working with mussel and seaweed farmers in Maine to test the potential of growing kelp alongside blue mussels — which are particularly vulnerable to increasing ocean acidity. In protected bays, growing kelp can naturally buffer seawater acidity and create an additional product for harvest in the process.

“Not only does this give us two commercially viable crops, but it also allows us to increase the positive impact on our local ecosystem,” said Matthew Moretti, CEO of Bangs Island Mussels, a Maine farm that has been collaborating with the researchers. “In the face of a rapidly changing environment, this is even more important.” 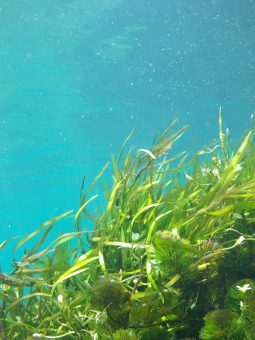 The new grant from the World Wildlife Fund will allow the researchers to expand their partnerships and research into kelp’s positive environmental impacts and potential applications. They will collaborate with other scientists and farmers to monitor water quality during and after the growing season at three kelp farms located in Maine, Alaska, and Norway. The team will track carbon dioxide, oxygen and nutrient concentrations, as well as basic metrics such as salinity and temperature.

That information will be used to create a computer model of water circulation, kelp growth, and resulting water quality changes that will enable them to better understand farmed kelp’s impact at the study farms, and predict kelp’s effects in other locations.

“Seaweed farming has the possibility to provide not only diversification and profit for struggling working waterfronts, but also critical ecosystem services for coastal marine systems,” says Price. “However, to earn the social acceptance of aquaculture, we need to rigorously document evidence of these water quality benefits across a range of settings.”

The global seaweed harvest is projected to reach a value of more than USD 30 billion by 2025. Byproducts from kelp are used to make toothpaste, shampoo, salad dressing, pudding, cakes, dairy products, frozen foods, and drugs according to NOAA. Cultivated seaweed grows quickly and requires minimal resources such as land or freshwater, providing a sustainable food source and making it an attractive crop for rural coastal communities facing dwindling wild-capture fisheries. The researchers’ goal is to provide an evaluation of seaweed aquaculture that helps foster positive public interest and develop science based solutions for the growing industry.

Kelp Is Like A Rain  Forest In The Ocean

According to NOAA, kelp is arrayed in the waters of the ocean much like the canopy of a tropical rain forest. The plants anchor themselves to rocks and have air filled sacs that help the upper fronds float near the surface where they can absorb energy from sunlight. In addition to absorbing carbon from the surrounding water, kelp forests help dissipate the power of coastal storms and provide protection to thousands of species who hide among the kelp to avoid predators.

NOAA says, “California sea lions, harbor seals, sea otters, and whales may feed in the kelp or escape storms or predators in the shelter of kelp. On rare occasions gray whales have been spotted seeking refuge in kelp forests from predatory killer whales. All larger marine life, including birds and mammals, may retreat to kelp during storms or high energy regimes because the kelp helps to weaken currents and waves.”

We tend to think of seaweed as the bane of our existence. It fouls our beaches and gets wrapped around the propellers of our yachts. Yet it is just another life form that can be used to sustain us if we take the time to understand it. Think of it as an aquatic forest, one that can provide an array of products just as wood products pervade our lives. It can function as a carbon sponge that helps protect us from the effects of climate change while we transition to a low carbon lifestyle.

In too many cases, humanity seeks to clear away the impediments to our abundant lifestyle. We think we must bend nature to our will but in fact, nature will always win in the end. With further research, kelp could become an important part of preserving an environment on Earth that can sustain human life. We need all the tools we can find for that task.