It also comes as world leaders are gathered in New York for the 73rd session of the UN General Assembly and follows a harsh UN address by Macron Tuesday during which he said he would refuse to negotiate commercial deals with any country that did not join the Paris agreement.

The U.S. is currently the only country not pledging to follow the agreement after President Donald Trumpannounced plans to withdraw last year.

Macron did not mention Trump by name Wednesday, but alluded to his actions during his remarks. 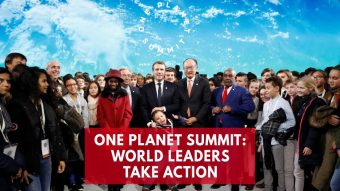 “The Paris agreement was supposed to be dead because of one decision,” Macron said, according to Bloomberg News.

But the summit wasn’t just to rally verbal support for Paris in defiance of Trump.

“We are not here just to speak but to be accountable,” Macron said. “Here we will see what is working and what is not working. What we need is action.”

Google, meanwhile, said it would launch a tool to measure greenhouse gas emissions from traffic and use Google Earth to measure the solar capacity of world cities.

Bloomberg announced that he would help organize a Wall Street Network on Sustainable Finance to encourage more climate and environment financing in U.S. markets, according to a press release provided by Bloomberg Philanthropies.

Political leaders also stepped up to the plate.

The European Commission promised 25 percent of the next EU budget, 320 billion euros, to climate initiatives, according to the same press release.

The EU also joined with France and New Zealand to launch the Joint Pacific Initiative for Biodiversity, Climate Change and Resilience to the tune of 20 million euros.

In total, more than 40 business and civic leaders gathered to report on the progress of 30 initiatives announced at the first One Planet Summit in December 2017, as well as to pledge new commitments.