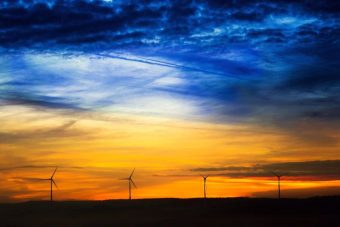 When Chris Christie, former governor of New Jersey, wasn’t closing traffic lanes leading to the George Washington Bridge to punish political opponents, he was putting up barriers to renewable energy. Now that he has been consigned to the dustbin of history, his successor, Philip Murphy, is pushing a plan that will help New Jersey realize 50% of its electrical energy from renewables by 2030. That target brings the state in line with similar programs underway in California and New York.

New Jersey, like several other states and many individual cities, is determined to do its part to meet America’s commitments to the Paris climate change accords, despite headwinds from the Trump administration. “If you look at the United States commitments under Paris, these percentages would more than uphold New Jersey’s share of the burden,” Robert C. Orr, the primary science adviser to the UN secretary general, tells the New York Times. Orr is now the dean of the School of Public Policy at the University of Maryland.

“Obviously, New Jersey is a significant state, but it’s not a driver in the same sense that California is,” he says. “But by putting New Jersey in a group with California and New York and then Vermont and Maryland, you start to see, not getting all the way to Paris targets, but you start to see the trend line moving toward us meeting Paris.” Governor Murphy has also been supportive of an initiative to build offshore wind turbines along the New Jersey coast, something Christie openly opposed. The new initiative seeks to build 3,500 megawatts of offshore wind generation by 2030, enough to power 1.5 million homes.

The part of Murphy’s plan that will not please environmentalists is his embrace of nuclear energy. “I believe the biggest bridge we have to our clean energy future are the nukes and, not to mention, the thousands of jobs they support,” he says. New Jersey currently derives nearly half of its electricity from four nuclear power plants. One of those — the Oyster Creek facility — is scheduled to close soon, but Murphy’s plan will shovel $300 million a year to the remaining nukes to keep them going for a few more years. New Jersey rate payers will have the privilege of paying the subsidy.

Nonetheless, some environmental groups feel the need to temper their distaste for the program. “We don’t want to see the abrupt closure of nuclear plants, because if you close them tomorrow, we know that they’ll just be replaced by more fossil fuels,” says Dale Bryk, senior strategic director for the Natural Resources Defense Council. “You have to have an orderly transition plan that involves scaling up renewables first, so that when the nuclear plants close, they’re replaced with clean energy.”

Not everyone is so sanguine, however. “It’s going to put a chilling effect on spending more for renewable energy, because to build out renewable will cost much more,” says Jeff Tittel, director of the New Jersey Sierra Club. “This bill is about a nuclear subsidy, and that’s the primary purpose. And that’s the diversion to make you think you’re getting something that you’re not.”

New York and Illinois have granted similar subsidies to nuclear facilities but they contain a provision the New Jersey legislation does not. Every three years, the companies that operate nuclear reactors in those states will have to open their books to demonstrate they still need the subsidy. The New Jersey nuclear plants will be under no such obligation.

Green energy proponents will complain the subsidies should be used to install more renewable energy facilities and they have a valid point. In the long run, every available dollar should be put to work creating the clean energy grid of the future rather than propping up traditional generating facilities that are no longer economically viable. Still, Rome wasn’t built in a day. Some progress is better than none, especially at a time when federal policy favors a return to the age of steam.