Would you believe us if we revealed to you that one Belgrade-based marketing agency with around 40 employees during just one day in April expanded its working capacity with 72,000 new members spread across five offices? If we told you as well, that their new workers are potentially smaller than the nail on the thumb of your hand, would you perhaps assume that they are – bees? 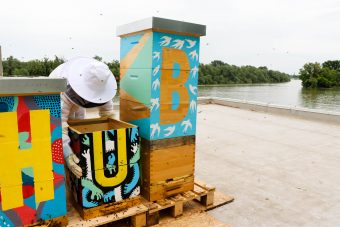 Following the recent discoveries of the Japanese, the  team  of  “Kreativa  Unlimited”  agency  found  themselves at the Sava estuary. Scientists from the land of the rising sun detected that the stay in  nature  doubles  the  level  of  one’s  creativity.  And what is more important to people who made a promise to their clients about having an inexhaustible source of interesting ideas than the eternal inspiration? For this very reason,  “Kreativa  Unlimited”  moved  to  a  raft  across  the  Great War Island eight years ago.

In  order  to  repay  nature  for  its  contribution  in  making  successful  collaborations  for  many  years,  this  marketing  agency decided to put some hives on the roof of its object. The employees of the company thus joined the Bundestag MPs,  City  Hall  of  Copenhagen  officials,  Paris  Opera  performers and Astoria Hotel managers in New York who had already  become  “urban  beekeepers”  a  few  years  ago.  They  also planted a garden on the terrace – the fruits produced there feed both them and the bees.

“We  are  proud  to  be  the  first  Serbian  company  that  is  engaged in urban beekeeping, and we hope to get competition very soon. It is important that we made the first step, so Belgrade is now listed on the map of European cities on whose roofs bees live and work”, says Stevisa Vujasinovic, PR manager of “Save the Bees” project.Urban beekeeping represents a practice of keeping bee colonies  in  cities  and,  according  to  our  interlocutor,  is  a  growing trend worldwide. By following it, you will be helping honeybees that are also affected by climate change, in addition to other disasters.

If you do  not see  yourself as a  bee savior,  then save yourself. Keep in mind the immense benefit of these valuable  insects  for  the  human  diet.  They pollinate inter alia around  200  crops,  and it is  estimated that,  due  to  their  extinction,  as  many  as  100,000  plants  would  disappear  from the face of the earth. The population of bees has been declining uncontrollably  in  recent  years.  “Their  endangerment  is  a  global  phenomenon,” Stevisa emphasizes, adding that in some parts of  the  United  States  they  have  already  been  declared  an  endangered  species.  Due  to  the  severity  of  the  problem,  the Chinese are forced to pollinate with specially designed tools,  but  it  seems  impossible  to  replace  the  bees  in  a  makeshift manner.

Given  the  fact  that  it  has  the  biggest  number  of  hives  per capita, Serbia doesn’t feel the devastation of the crisis to  the  same  extent  as  other  countries,  but  the  recent  bee  deaths in Vojvodina have concerned the public.

The  importance  of  their  cultivation  in  urban  areas  is  manifold  both  from  the  perspective  of  ecology  and  from  the point of view of economics. 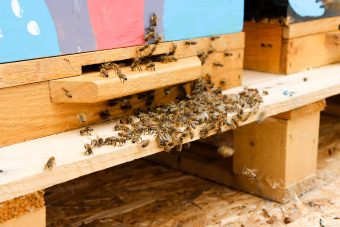 Beekeepers are claiming that the population of city apiaries  is  healthier  and  more  productive  than  their  relatives  from the village and that it gives a huge contribution to the local biodiversity. Although urban beekeeping is most often a hobby and not the primary source of finance for a house-hold, the experts are emphasizing that a family of four could support itself by taking care of around fifty beehives.

Honey is a superfood. Thanks to a high content of simple  sugars,  vitamins  and  minerals,  it  is  easily  digestible  and, after getting in the body, it goes directly to the blood-stream. Listing its positive characteristics, no matter how long  it  goes,  will  always  end  in  et cetera.  “Honey  regenerates  tissue,  eliminates  pain,  improves  heart function,  increases  resistance,  has  a  calming  effect  on  the  nervous  system,  regulates  blood  pressure,  reduces  elderly  weakness, strengthens mental abilities, et cetera,” Stevisa notes and announces the possibility of branding “Kreativa Unlimited” honey from next year. 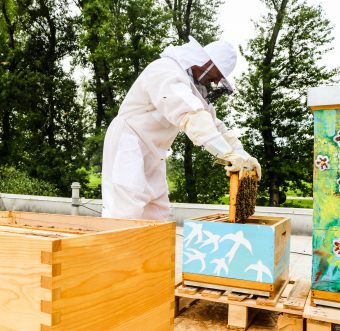 It  shouldn’t  be  overlooked  that  the  joint  cooperation  and  diligence  of  bees  and  beekeepers  is  also  resulting  in  royal jelly, propolis, wax and bee venom.

Ecology is one of the aspects of corporate social responsibility, so we took the opportunity to ask Stevisa whether clients of  his  marketing  agency  recognize  the  need  to  take  part  in  improving  the  quality  of their environment.  “One  of  the  companies  that  have  hired  us  focuses  on  the  specific goal  of sustainable development  every  year,  and  it  implements  projects  tailored  to  local  needs  in  different  countries. Last year we worked on Belgrade sparrows’ protection. Since the company in question is a manufacturer of alcoholic beverages, this year we collected bottles thrown from cafes  and clubs  and  made  sculptures  from  them,”  he  replies.

Activities in  the field  of bee conservation  “Kreativa  Unlimited”  implemented in  cooperation with the creative  hub  “Nova  Iskra”  and the environmental organization  “Ekonaut” within the project “BeeConnected”. This project is  based on renting and maintenance of  hives for socially  responsible  companies  and  individuals  who  have  a  desire  to have an apiary in their space. 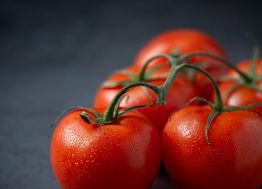 Do We Know What We Eat and How Safe We Are?