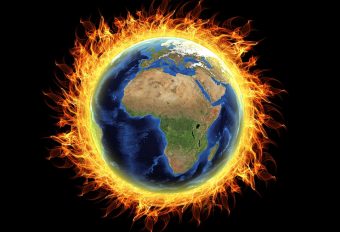 Global warming is likely to disrupt a natural cycle of ice ages and contribute to delaying the onset of the next big freeze until about 100,000 years from now, scientists said on Wednesday. In the past million years, the world has had about 10 ice ages before swinging back to warmer conditions like the present. In the last ice age that ended 12,000 years ago, ice sheets blanketed what is now Canada, northern Europe and Siberia.

In a new explanation for the long-lasting plunges in global temperatures that cause ice ages, scientists pointed to a combination of long-term shifts in the Earth’s orbit around the sun, together with levels of carbon dioxide in the atmosphere. They said the planet seemed naturally on track to escape an ice age for the next 50,000 years, an unusually long period of warmth, according to the study led by the Potsdam Institute for Climate Impact Research. But rising man-made greenhouse gas emissions since the Industrial Revolution began in the 18th century could mean the balmy period will last for 100,000 years, they wrote in the journal Nature.

The findings suggest human influences “will make the initiation of the next ice age impossible over a time period comparable to the duration of previous glacial cycles,” they wrote. “Humans have the power to change the climate on geological timescales,” lead author Andrey Ganopolski told Reuters. He said the lingering impacts of greenhouse gases in a far distant future did not in any way affect the urgency of cutting emissions now that are blamed for causing downpours, heat waves and rising seas. “The earlier we stop, the better,” he said. Almost 200 governments agreed a deal in Paris last month to shift from fossil fuels to combat climate change. Last week, another group of scientists said humanity had become a force in shaping the planet’s geology and suggested an “Anthropocene epoch” began in the mid-20th century with factors such as nuclear tests and industrialization.

“Like no other force on the planet, ice ages have shaped the global environment,” said Hans Joachim Schellnhuber, director of the Potsdam Institute and an author of Wednesday’s study. He suggested a new epoch might instead be called the “Deglacial”. Some past studies have suggested that global warming can delay ice ages, but Thursday’s study laid down clear rules. It said the start of past ice ages coincided with low levels of solar energy reaching the Earth in northern summers, like in current times. But an ice age had not begun because of relatively high, apparently natural, levels of carbon dioxide in the atmosphere since before the Industrial Revolution.