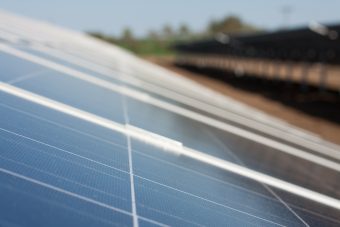 A residential building has become the first in Ghatkopar to use solar energy to meet their electricity needs.

The 15-storey Shivshakti Heights, located near the railway station, has got a 9.135 kilowatt (kW) peak power rooftop solar system installed, which lights the lifts and the building’s common areas. The building is home to 76 families.

“Adopting solar energy is not only a smart move that results in savings but also contributes to improving the environment by helping reduce the carbon footprint,” said Dinesh Doshi, member of the co-operative housing society.

Spread across 1,100 square feet, the system consists of 29 solar panels that generate 14,600 kilowatt hour (kWh) solar energy as compared to 60,000 kWh, the annual electricity consumption of the society. The residents hope to save Rs 1.65 lakh in electricity bills annually. “During winter months, the panels generate 45 kWh solar energy in a day and during peak summer months, it goes up to 50 kWh,” said Animesh Manek, founder and director, Avishakti Rooftop Solar Pvt. Ltd, the private company that installed the system.

A Mumbai house with two bedrooms uses, on an average, around 8 KWh electricity daily. “By going solar, we reduce the dependency on the electricity grid and thereby cut the electricity bills by 25%,” said Bharat Satra, another resident of the building.

The society has also installed a net-metering system, which allows surplus power generated by solar panels to be sent into the public grid and any deficiency is imported from the grid. At the end of a financial year, the society is charged by the electrical power supplier only for the ‘net usage’.

“Rooftop solar power plants once installed will provide power for 25 years. The initial cost of installation may be a little high but you recover the same within 3-4 years and after that we are not only free from exorbitant electricity bills but we have done our bit towards contributing to a pollution-free environment,” said Jay Desai, secretary, Shivshakti Heights.

Mumbai receives 300 days of sunlight in a year owing to its geographic location, making the sun an abundantly available source of energy with the potential to move away from the usual carbon-emitting process of burning coal and gas for electricity.

“The government’s initiatives in pushing people towards adopting renewable means of energy and this has resulted in a lot of enthusiasm and awareness,” said Manek. “It is interesting to see how people are not only doing it to save money but also for the larger cause of a greener tomorrow.”

“Mumbai is leading the way for harnessing clean, green energy from the sun and is participating in government’s mission to scale up the solar power to more than 10% of total energy supply in the next five years. Efforts of the Ghatkopar housing society are commendable,” said a senior official from the Brihanmumbai Municipal Corporation.