This week in Los Angeles, 15,000 people will be attending one of the biggest creativity conferences in the world, Adobe MAX. It’s not the kind of event that is normally associated with conservation, but this year is different. The creative community is getting involved in coral reef conservation and it might just help save an entire ecosystem. 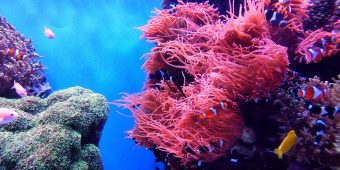 Corals aren’t as charismatic as big cats, elephants or dolphins, so when people consider where we should focus our conservation efforts, corals rarely get attention, protection and funding support. They live in a world that’s out of sight and out of mind, and it’s a world that is rapidly changing. The ocean absorbs 93 per cent of climate heat and coral reefs are firmly on the frontline of the climate issue. In 2016-2017, half the corals on the Great Barrier Reef died from ocean heatwaves and that was just one of many reef systems that were hit. Just imagine if half the trees in the Amazon suddenly died—how concerned the world would be.

Corals rank as one of the most important animals on the planet—a foundation species that supports a quarter of all ocean life and over a billion people with food and income. They’re worth US$375 billion each year to the global economy. Put simply, we can’t afford to lose them. Yet despite all this, there’s remarkably little support for saving corals. We’ve lost over half the world’s corals already and the speed of decline is accelerating.

The latest report by the Intergovernmental Panel on Climate Change tells us that we could lose between 70 and 90 per cent of the world’s coral with a 1.5˚C global increase in temperatures, and up to 99 per cent of corals with a 2˚C increase. “Coral reefs are perhaps the most vulnerable ecosystems on Earth to climate change, like nature’s fire alarm. We are running out of time if we want to save these iconic ecosystems, and it will require partnerships across a diverse range of sectors to do so,” says Gabriel Grimsditch, UN Environment Programme (UNEP) marine ecosystems expert.

It has become clear we need to be very creative if we are going to save them. To do just that, UNEP has joined forces with The Ocean Agency, Adobe, Pantone, We Transfer, the World Surf League and PADI: Professional Association of Diving Instructors, and together we are aiming to unlock the potential of the global creative community in rapidly attracting mainstream support for coral reef conservation. The aim is to create enough attention and excitement around the issue that it rapidly becomes a priority for ambitious policy support and funding.

The inspiration for the initiative came from the corals themselves. Some corals turn incredibly colourful when under too much stress from ocean heatwaves combined with excessive sunlight. It happens during the coral bleaching process and is caused by a chemical that corals produce which acts as a sunscreen. Instead of just turning white (the colour of their skeletons which becomes visible during the bleaching process), the colourful chemicals make the corals appear to ‘glow’ in bright colours. It’s nature’s most vibrant warning signal—a signal that we’ve reached a tipping point for the planet. But it is warning that has largely gone unnoticed.

Using new technology, Adobe and Pantone teamed up and directly sampled the colours of these glowing corals (uniquely captured during the filming of the Netflix Original Documentary, Chasing Coral), to create an official Pantone range. The Glowing Gone campaign, launched in June 2019, challenged the creative community together with the powerful brands they work with, to use these colours to amplify coral’s warning signal and demonstrate support for urgent action.

The initial phase of the campaign was a big success with well over 1,000 creatives getting involved. They inspired major brands like the World Surf League to get on board too. The world’s best surfers competed in ‘Glowing’ jerseys at a Glowing-themed Pro-tour event in Tahiti, broadcasting support for coral reef conservation to the world. The diving community, through PADI, is also getting involved in the next phase of the campaign, launching at Adobe MAX this week. This phase is not just for creatives. Everyone is invited to get ‘Glowing’.