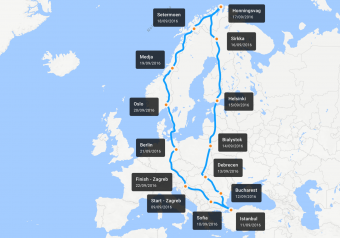 Cvetojević will travel from Istanbul to Nordkapp.

Elon Musk of Tesla Motors once said: “If something is important enough, you have to try it, even if it is likely that the idea will fail.” Musk was also correct when he predicted the growth in production of electric cars, which are slowly but surely spreading to Europe as well. With one such electric car, Croatian entrepreneur Saša Cvetojević will travel 10,000 kilometres. He and a Tesla car will start their journey in Istanbul and go to Nordkapp, reports N1 on September 7, 2016.

“People mistakenly think that travelling in cars driven by ‘normal’ engines, with a display which tells them how much fuel they have, is the safest was to travel, but actually with electric cars we have all the information we need”, explained Cvetojević. “You would actually have to intentionally try and behave very irresponsibly to remain without electricity in the middle of a road”, explained Cvetojević, who did admit that in some countries it might be more of a challenge, since many Eastern European countries still do not have a system of charging stations.

“The goal is to go travel over Europe from its southernmost to its northernmost point. However, an electric car can go through countries where there is no infrastructure”, he said. “Of course, it is possible to charge a car without a specialized station. It can be recharged at any outlet, and the only difference is time.” With super-charger “it takes about 15 to 20 minutes, while with an ordinary socket you may need a whole night and a little bit more. There is also a possibility of using a stronger home socket, which would take about five hours”, explained Cvetojević. 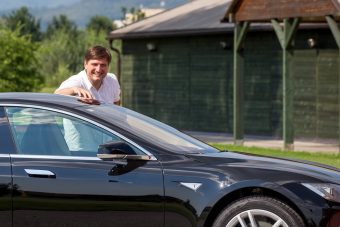 He believes that Croatia, just like many other countries, has made a mistake with the system of charging stations which are like islands and are not sufficiently connected. But, it is even worse not to have charging stations at all. “It will not always be easy, especially in countries where there are no charging stations, but we want to prove that it is possible.”

As for the Croatian market, currently there are over one thousand owners of electric cars. “We are a tourist country, and every day people from abroad call me and ask for charging stations, and how to reach them.” It seems that Croatian market, due to purchasing power, at present is not interesting enough for the major players. They have now installed two stations, one in Split and another one in Senj.”

“There will always be two drivers in the car. Four of us will go on this voyage, including a photographer. People will be able to follow us on the internet”, said Cvetojević. You can follow the voyage here.